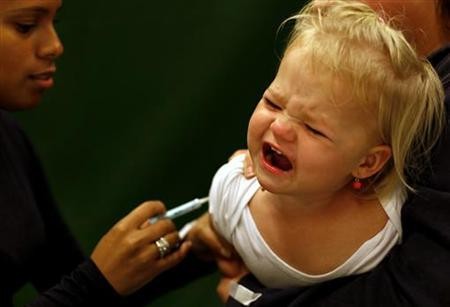 A Child receiving a vaccine against the H1N1 virus(Photo : REUTERS)

Google Inc. is updating 'Flu' Trends' the software it created to estimate the spread of the flu in order to improve its accuracy and to better aid public health officials in responding to flu outbreaks.

Google launched Google Flu Trends back in 2008 as a way to track the spread of the virus using high-tech program and Web-search information.

Now, the update will include data provided by Centers for Disease Control and Prevention in the United States in order to increase its accuracy level, according to Christian Stefansen, senior software engineer at Google as revealed by Google's research blog on Oct. 31.

The update follows an incident wherein the Flu Trends "significantly overpredicted" the Flu levels back in 2012-2013 season despite heavy media coverage of the illness. This is the second time that the program has encountered a major overhaul. The company reportedly showed better results last year, and Google is betting that it will continue providing better results in this year's coming 'flu season.'

"It's important that public health officials and health professionals learn about outbreaks as quickly as possible," Stefansen said.

"These models nicely complement other survey systems -- they're more fine-grained geographically, and they're typically more immediate," he continued.

Google is putting out efforts to address challenges society is facing including health problems using its advanced technological skills and financial leverage.

The new and updated Google Flu Trends software model is currently used only in the United States and may expand to other areas across the globe, depending on its success, as stated by Google.

As of the moment, Google Flu Trends is currently in use on more than 39 countries. Aside from that, Google also tracks dengue fever trends in 10 countries.