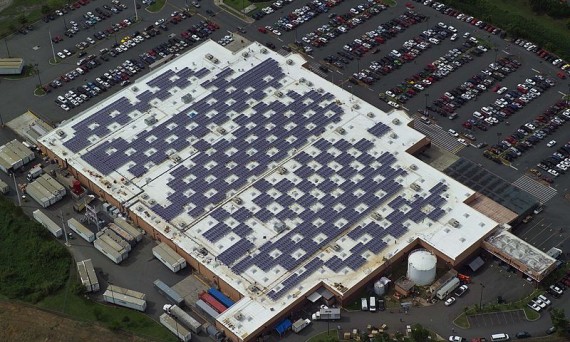 Walmart is taking a huge step towards a greener future by teaming up with SolarCity and SunEdison, two solar energy providers as it plans to put up 400 new solar panels in all its stores and facilities across the United States by 2018.

Walmart is partnering with two of the largest solar installers in the U.S. as part of the retailer's commitment to supply 100 percent of all its energy, or approximately seven billion kWh of renewable energy by the end of 2020, Chainstoreage reports.

"We are pleased to announce this expansion on the heels of the Solar Energy Industries Association's commercial solar report, which recognizes Walmart as having the most installed solar capacity in the U.S.," said Pam Kohn, executive VP  at Walmart and president of Walmart Realty.

Choosing SolarCity and SunEdison was a no-brainer for Walmart since their relationship started years ago.

"SunEdison is one of Walmart's earliest solar providers with projects dating back to 2007," said Katherine Jennrich, senior manager of energy services at Walmart, in a press release.

Walmart currently has already installed 260 solar panels in the United States, supplying them of 105 MW of clean power, according to a report by the Solar Electric Industries Association.

Since then, the company has saved over $5 million in energy expenses.

"This is the beginning of the next wave in renewable energy for Walmart, an effort we announced in May when we welcomed President Obama to our Mountain View California store," said Kim Saylors-Laster, Walmart vice president of energy, in a press release.

"These projects bring us closer to fulfilling our commitment to double the number of on-site solar energy projects in U.S. stores, Sam's Clubs and distribution centers-thereby reducing our energy expenses and generating clean energy in local communities," she added.