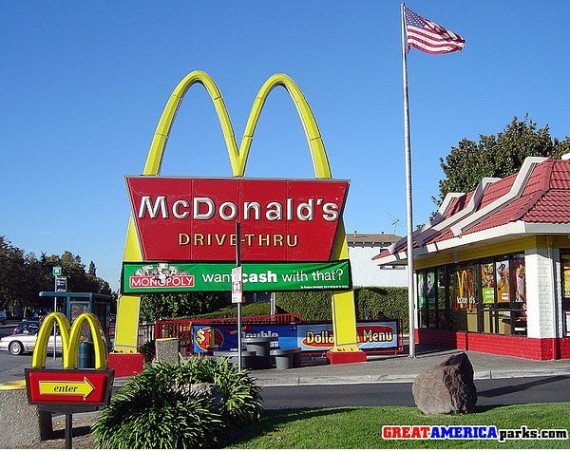 McDonald's stores throughout Great Britain will feature a differently-attired staff - come this fall, the employees standing behind the counter asking for orders will be dressed up in 1960's fashioned clothes, something akin to hit AMC television series "Mad Men."

The outfits, which feature all employees wearing polo shirts, said a new report in U.K. publication The Telegraph, which will be mustard yellow for men and "gherkin green" for women. The shirts will be checkered, and the staff will wear green pants or skirts. McDonald's managers will wear black and white, said the report, though female managers will adorn a mustard yellow neck scarf.

The uniforms will make their debut during the London Olympic Games, beginning July 27th, throughout four McDonald's outlets at Olympic Park and Athletes village in Stratford, said The Telegraph, and will then expand out to the rest of the chains throughout Britain this coming fall. The designs were created by Wayne Hemingway, who founded the Red or Dead fashion label.

"We wanted to put some color into it. We wanted colors that reflected where McDonald's and the restaurants were going," Hemingway told The Telegraph. "We haven't gone for bright reds and yellows. We've gone for more muted colors."

Prior to the 1960s look, with skinny ties for male managers and pencil skirts for females, noted The Telegraph, McDonald's staff wore mocha brown and black uniforms while working at the worldwide fast-food chain in Britain. With the aid of the Fred Perry-style polo shirts, explicitly made to recreate the "Mad Men" look, Hemingway went for a more classy and formal design for the brand.

The change in uniforms includes getting rid of the baseball caps employees used to cover their hair, as Hemingway felt they were too American and reminiscent of sports, and not food. Hemingway agreed to create styles for McDonald's as he was impressed by their environmental stance when it came to the food offered at the chains, noting the use of free-range eggs, and using oil used to fry French Fries to fuel its trucks, said The Telegraph.

"We wanted to break away from baseball caps," Hemingway told The Telegraph.  "These are more bakers caps or something you'd find in an pizzeria in Italy. I have a thing about baseball caps - they are a little bit too American, and they are about sport and petrol pump attendants."