Sony Pulls “The Interview” From All Cinemas, North Korea Believed To Be Behind The Hacking 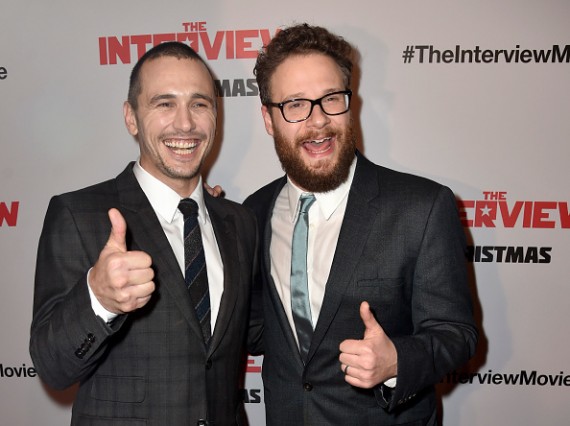 James Franco and Seth Rogen at the premiere of "The Interview"(Photo : Getty Images)

Sony Pictures officially cancels the premiere of "The Interview" on Wednesday, Dec. 25.

Hackers threatened to blow up all theaters screening the movie if Sony decides to push through with the premiere. On Wednesday, the hackers released an email saying that everyone should stay away from cinemas on the date of The Interview's premiere.

"We will clearly show it to you at the very time and places "The Interview" be shown, including the premiere, how bitter fate those who seek fun in terror should be doomed to," the hackers wrote in the email.

The hackers alluded to repeat 9/11 and blames the greed of Sony for whatever will happen in the coming days. They even warned those who live near a movie theater to evacuate if they do not want to be at the crossfire.

The Interview, starring James Franco and Seth Rogen, is about two journalists who are sent on a CIA mission to assassinate the North Korean dictator.

Sony gave cinemas in the U.S. and Canada the option to not screen the movie. But on Thursday, Dec. 18, the company decided to pull the movie from theaters nationwide, including the five major cinema chains around the country.

"We respect and understand our partners' decision and, of course, completely share their paramount interest in the safety of employees and theater-goers," said Sony.

The hackers calling themselves Guardians of Peace have released to the media a cache of stolen email exchanges from Sony. While the movie company asks the media not to publish the stolen data, some publication such as The Variety believes it's "unavoidable" and is now on public domain.

Some emails revealed that Sony execs have showed excerpts of The Interview to U.S. government officials and approved it.

The FBI confirmed after the cancellation of the movie premier that they believe the Sony hacking is caused by North Korea. The communist country denied it, but called the hacking a "righteous deed."

Sources told Fox that even though they suspect North Korea to be behind the cyberattack, the hacking didn't come from within the borders of the country.

Sony Pictures has no further plans to release the movie.