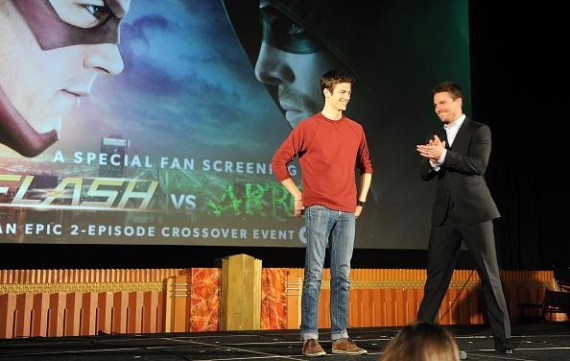 The success of "The Flash" & "Arrow" crossover episodes has become the barometer of many TV series, particularly those that have comics roots. When CBS announced that it will do "Supergirl" on TV, the immediate question by comics fans is if the cousin of Superman will meet the Scarlet Speedster and the emerald vigilante from Starling City.

In November last year, KsiteTV reported that Greg Berlanti, who works as executive producer for "The Flash" and "Arrow," met with "Supergirl" producer Ali Adler and talked about crossover of their shows. The website said that Berlanti is bullish it will happen but nothing is cast in stone yet.

Fast forward to December, talks of "The Flash" & "Arrow" crossover episodes with "Supergirl" intensified as Marc Guggenheim, who works as EP on "Arrow" and "Supergirl," said in an interview with the Hollywood Reporter that having the three DC Comics superhero is possible and THR commenting that it is in the contract he signed with CBS. Guggenheim was with THR and sat down with Agent Carter showrunners Tara Butters (who is his wife) and Michele Fazekas for a fun, tell-all discussion.

Fazekas: Marc, CBS is doing Supergirl. What is the possibility of a crossover?

THR: I actually heard it's in Greg's deal, that Supergirl can cross over with Flash and/or Arrow.

"The Flash," "Arrow," crossover episode with "Supergirl" is not the only juicy bit Guggenheim shared in that interview. He said that there is a possibility that they bring in more Justice League characters in Arrow, including Batman.

"At the end of the day it'd be so awesome to have Batman on the show. That'd be really cool," he said.

"I don't think that will be happening anytime soon, but you never know...one day. One thing we're always saying...we never expected to have had the Huntress [Jessica De Gouw], Deathstroke [Manu Bennett] or Deadshot [Michael Rowe]; we ended up with a lot more DC Comics characters becoming part of the show than we had ever planned."

So far, nothing is concrete yet about the "Supergirl" TV series in CBS. Main cast is yet to be named. As for the Flash and Arrow, the two CW Network shows will return on January 20 and 21, respectively.