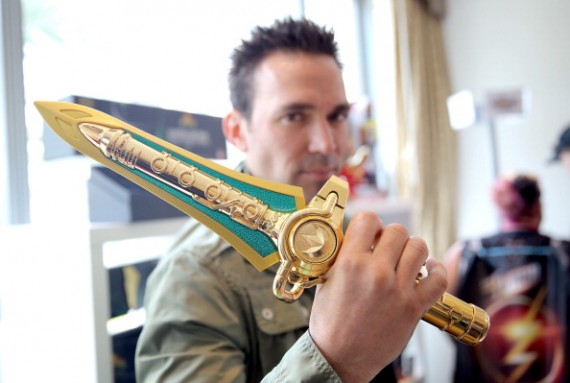 While fans are still in awe with the "bootleg" of "Mighty Morphin Power Rangers" movie, Haim Saban and Lionsgate are reportedly working double time for the reboot.

And original cast Jason David Frank, who originally played the role of Green Ranger aka Tommy Oliver, is very much aware the developments and has expressed his desire to appear in the upcoming reboot.

"I wanna be in the real 'Power Ranger' movie," Frank admitted in his Facebook post when he responded to the fan-made short film made by Joseph Kahn and Adi Shankar. "You know what I mean? So Lionsgate let's get this stuff going on be in the real movie. I've saved my character for so long. And when I bring my character out in like in the movies or something linke that I want it to be legit. I want it to be a Saban blessing approved project."

Kahn took to Twitter to tell the viewers that Saban is trying to take down the 14-minute-long version of the "Mighty Morphin Power Rangers."

"Saban is trying to shut POWER/RANGERS down. If you'd like to keep watching, tell them to stop harassing me," he posted.

In a previous interview with Kahn, he explained and describe the movie that he created with Shankar.

"The dark and gritty reboot thing is such a cliché that the intention was not only to make it dark and gritty but make it even darker and grittier than you could possibly imagine, hence the brains, the blood and the violence and the sex," Kahn, who's known for helming music videos of Taylor Swift, Rihanna and Shakira, said in an interview with HitFix.

Adding, "Overall, it's a very serious thing. The joke isn't that you're laughing at each particular scene; the joke is that we did this 'f**k y**' thing in the first place. You're going to look at it and you go wow I can't believe they f****ng did that."

A real reboot to "Mighty Morphin Power Rangers" movie under Lionsgate is set to hit theaters on July 22, 2016.