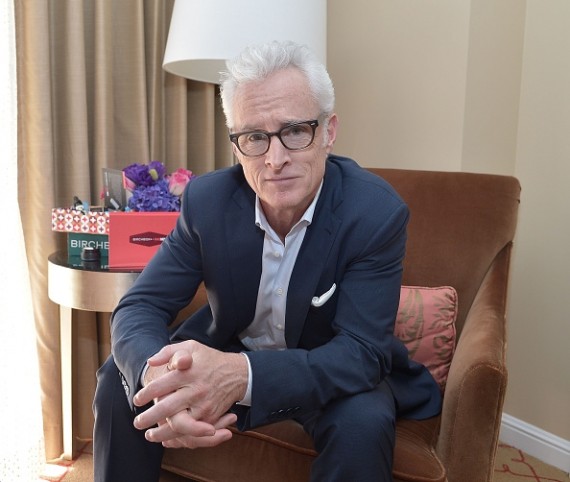 John Slattery, who starred as Howard Stark in "Iron Man 2," has been cast in "Ant-Man."

The new Marvel movie will hit the theaters this summer and it will feature Paul Rudd as Scott Lang. The film also stars Michael Douglas as Hank Pym, Hayley Atwell as Peggy Carter, Evangeline Lilly as Hope Van Dyne, Corey Stoll as Darren Cross, Judy Greer as Maggie, and Bobby Cannavale as Paxton.

It took almost five years before Slattery is seen in another Marvel movie and the studio hasn't revealed yet what his role will be in "Ant-Man." However, there are rumors that it could be a flashback scene that will feature him and a younger Hank Pym.

When the "Mad Men" actor first starred in "Iron Man 2," he didn't expect this movie to be huge. During an interview with IGN, he was asked how he feels being part of "Ant-Man."

"It's crazy, yeah. It's the biggest set I've ever seen, I think, or I've ever been on certainly," he said.

The 52-year-old actor also talked about his experience filming the latest Marvel movie.

"It's just a gigantic room and there's numbers and girders and you think, is that what green screen looks like? And things change so fast," Slattery said. "The way you did special effects last year can be completed outmoded in three months when they figure out some other way of generating some image."

The Emmy Awards nominee wasn't the only one who played Tony Stark's father. Dominic Cooper also starred as Howard Stark in "Captain America: The First Avenger." The 36-year-old actor will reprise his role in Marvel's "Agent Carter" TV series, which currently airs on ABC.

Some people compare John Slattery to Dominic Cooper and he was asked if the younger actor's performance had influenced him in his portrayal of Howard Stark.

"No, that's not true. I've seen scenes and I've seen him in other things and he's terrific. I've never met him and I'm not a very knowledgeable fan," he said.

So how is he dealing with the comparison?

"I'm sure people have, 'How dare he play this when Dominic...?!' I don't really get into that so much," Slattery said. "My participation hasn't been that involved. I was there for a day and whenever we did 'Iron Man 2', it was not that much more involved this time."

Watch John Slattery portray Howard Stark in "Ant-Man," which is scheduled to be released on July 17, 2015.