‘The Walking Dead’ Season 6 Cast: Maggie, Glenn Draw Their Weapons While Daryl Has His Trusty Crossbow In New Set Photos; Abraham To Get Bitten By Walker? 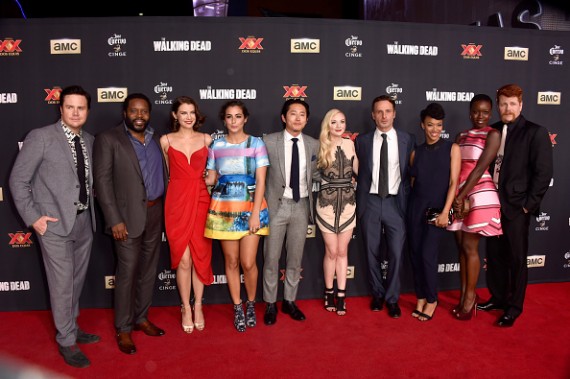 The latest set photos featuring "The Walking Dead" season 6 cast seem to point at trouble brewing in Alexandria. Meanwhile, a fan site has reportedly spotted Michael Cudlitz's Abraham filming a scene that puts him dangerously close to a walker.

Being in the confines of Alexandria's walls doesn't mean Rick and company are safe it seems. Entertainment Weekly posted new set photos from the set of the season 6 premiere featuring Maggie, Glenn and Daryl.

"Steven Yeun's Glenn and Lauren Cohan's Maggie both have their weapons drawn in their photos, and judging by the house in the background of the Maggie photo, it appears she may be inside the walls of Alexandria," EW wrote.

It's not clear who they're pointing their guns at. The website also noted cuts and abrasions on Glenn's face which could be the result of his brawl with Nicholas from the season 5 finale. If so, the next season's premiere could pick up in its aftermath.

And while the couple looks ready for action, Norman Reedus' Daryl is the exact opposite.

The fan-favorite badass is seen with his signature crossbow slung over his shoulder suggesting he's not in any danger.

The rest of "The Walking Dead" season 6 cast were not seen in the photos but a fan site says one of them may not stay in the show for long. The Spoiling Dead Fans have been on set searching for clues and manage to snap actor Micheal Cudlitz' Abraham filming a compromising scene.

"Cudlitz is seen with a group of military walkers impaled on an iron fence, one of which is carrying a weapon. In attempt to steal the weapon for himself, he antagonizes the zombies, who proceed to try to bite him. As he falls from the fence, his head comes in dangerous proximity to being bitten," according to Melty.

Was Abraham really bitten by a walker?

Reportedly, The Spoiling Dead Fans also said that Cudlitz was later kept from view by crew members "implying this top secret scene could be a key one for the character."