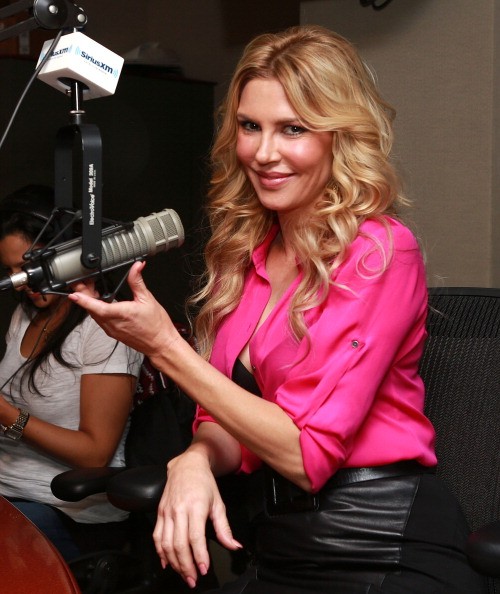 She may have left "Real Housewives of Beverly Hills," but Brandi Glanville's trouble has yet to end.

Contrary to her claims, Eddie Ciprian's ex-wife was apparently fired from the show because of causing too much trouble to Bravo showrunners.

"Brandi got the ax Thursday after producers decided she was just too much trouble. Brandi was difficult and erratic on the set, fighting -- sometimes physically -- with other castmates," TMZ reported.

"But sources connected with the show tell us, they are not going to immediately replace her. They're hoping Brandi views this as a 'Come to Jesus,' and if she comes back for occasional visits, she can prove to them she can act appropriately enough so she doesn't get in the way of production."

Brandi Glanville who has been with "Real Housewives of Beverly Hills" for three seasons is now reportedly being threatened with a lawsuit by her former castmate Kyle Richards.

"Now @kylerichards is threatening me with a legal letter because if my tweets? Get my address from @Andy I will add it to my pile #rich coward," Glanville revealed on Twitter.

"Let me tell u what I wouldn't do 4 a TV show @kylerichards17 exploit 1 sister's sobriety & f**k over the other @KathyHilton husband's business!"

Then she dropped the bomb on Richards' husband Mauricio Umansky's business, "@kylerichards17 #truthcannon your husband use to work for kathy's husband until he secretly stole agents & clients to start the Agency #STFU."

While there's reportedly an ongoing lawsuit against Glanville, Richards who was on a lunchdate with co-star Lisa Vanderpump at Villa Balanca in Beverly Hills told TMZ that "We wish her the best."

Brandi Glaville has vehemently denied rumors claiming that she was fired from "Real Housewives of Beverly Hills."

In an official statement which was posted on Bravo, Glanville explained that she left on her own.

"After a lot of careful thought and deliberation I have decided not to return to RHOBH as a full time cast member this season," she said.

"The past 4 years have been amazing, a complete roller coaster of a ride. I will always be thankful to Bravo for the opportunities that have come along with doing this pop culture phenomenon of a show. In the meantime, I'm working hard on my podcast, my new wine business and my clothing line. And keep an eye out for my next adventure that will show everyone a more well-rounded side of who I really am."

And while she may no longer be coming back as a regular cast on "RHOBH," Glanville is reportedly in talks of having her own reality show.

"Meanwhile, the former model has told friends that she is now in talks with three different networks - including Bravo - about starring on her own show 'about her life,'" NY Daily News reported.