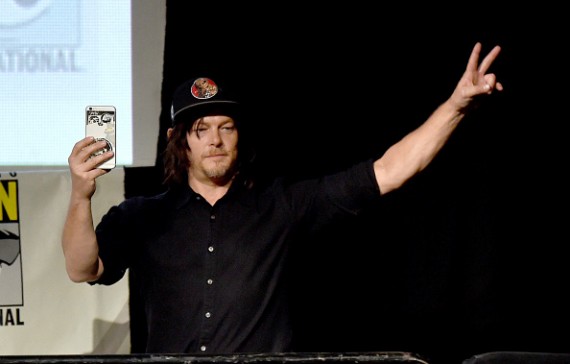 Trouble is brewing inside the Alexandria safe-zone as a new promo revealed before SDCC 2015 for the upcoming season teased. Actor Norman Reedus also described "The Walking Dead" season 6 plot as "particularly complicated" during an interview.

The season 5 finale saw old pals Rick Grimes (Andrew Lincoln) and Morgan (Lennie James) finally reunited but the closing moments could start conflict between them and the rest of Alexandria.

"The art above suggests an impending face-off between the recently reunited Rick and Morgan, with citizens of the walled-off community lining up on both sides," Entertainment Weekly wrote.

Behind Rick stands his group including Daryl, Maggie, Glenn, Abraham, Michonne and the rest. Meanwhile, Alexandrians Jessie, Deanna and Aaron are behind Morgan.

As EW pointed out, Rick's big speech at the end of last season failed to unite the town. The fact that Morgan saw Rick shoot Jessie's husband could be the reason for this.

"It also implies that hardboiled Rick and now Zen-like Morgan may indeed come into conflict over the proper rules of engagement in the zombie apocalypse."

Fans may recall that it was Morgan who broke the news to Rick, who then just woken up from a coma, that the world has ended all the way back in first season.

A lot has changed since then but Norman Reedus, who plays crossbow-wielding badass Daryl in the show, told The Nerdist that "The Walking Dead" season 6 plot will be "particularly complicated."

"The storylines are really interwoven with future and past. Certain things happen, and you're kind of like, 'Wow, that just happened.' Then you'll figure out episodes later why that happened and what that meant."

"A real mature sort of storytelling has really taken over us right now. It's super interesting and super thrilling," he added.

More details about "The Walking Dead" season 6 plot is expected in the coming weeks. As it was announced at SDCC 2015, the new season will premiere in October 11.