‘Doctor Who’ Season 9: Peter Capaldi, Jenna Coleman Are In On Female Doctor Idea But EP Steven Moffat Says Not Yet; ‘There Is No Vacancy’ 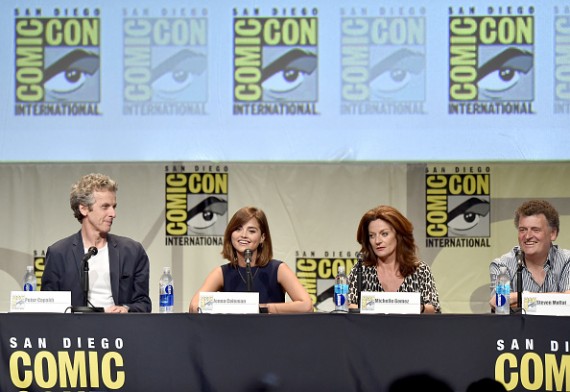 Last series, many were surprised with the introduction of the female incarnation of The Master. Michelle Gomez's Missy proved to be such a hit that calls for a female Doctor have come up - calls that "Doctor Who" season 9 stars Peter Capaldi and Jenna Coleman that support. As for showrunner Steven Moffat, not so much.

Actress Jenna Coleman, who plays the Doctor's companion Clara Oswald, spoke before fans at the Women Who Kick Ass panel at Comic-Con last weekend about the idea for a female frontwoman for the BBC show, according to The Daily Express.

"I think it's absolutely possible. There's absolutely no reason why not," the 29-year-old actress said. But the change doesn't have to come so soon, according to the "Doctor Who" season 9 star.

"I think Peter Capaldi is doing the most wonderful job so there's not currently a vacancy," Coleman added.

The Doctor himself agrees with his co-star saying that the gender-bender is expected at some point in the future.

"I would expect so at some point, I think why not? Absolutely. I would expect it at any moment. If you turn around right now I might suddenly transform."

Even Missy expressed her support for "Doctor Who" season 9 star Peter Capaldi as the current Time Lord.

"Can I just say on the Doctor's behalf that we have right now, it's hard for any of us to see past this one, and he's all man," the Scot actress said.

Gomez, who returns as Missy for the two-part series 9 premiere, previously said that a female Master is "change enough for now."

Showrunner Steven Moffat left no doubt on his response in the matter.

"There is no vacancy. You just met Peter Capaldi."

"The EP wouldn't come out and say a female Time Lord was coming, but he made it clear from casting a woman as the Master that it was 'in the subtext,'" Deadline said.

"When he said 'subtext' he pointed to Michelle Gomez who was sitting next to him. We are likely to infer that if the Master can be a woman, [then] so can the Doctor," Hypable said.

And as usual, "Doctor Who" series 9 star Peter Capaldi coughed up a witty reply.

"Maybe I should do a drag episode."

As it was announced at SDCC 2015, "Doctor Who" will return for its ninth season on September 19.