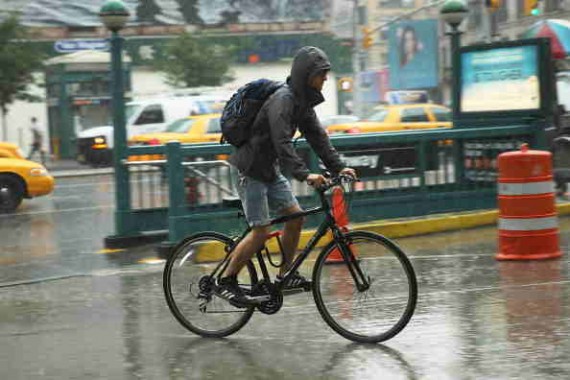 The Metropolitan Transportation Authority (MTA) has announced that it would be adding bicycle racks on two Staten Island bus routes starting September 6, 2015, according to a press release issued by the MTA.

The bike rack will be the first time that it is made available for public use in a New York City Transit.

The "Bike & Ride" will be a yearlong pilot and is available on the S53 and S93 routes, according to the press release.

The route runs between Staten Island and the Bay Ridge section of Brooklyn over the Verrazano-Narrows Bridge.

Darryl C. Irick, president of MTA Bus and senior vice president of the New York City Transit Department of Buses, said in the press release that the bike rack will increase the mobility of customers who travel between Staten Island and Brooklyn.

"Before this program, our customers had no direct way to travel with their bicycles on public transportation between Brooklyn and Staten Island," he said. "Now customers can take advantage of the city's bike lanes and greenways without worrying about how to transport their bicycles,"

The Wall Street Journal adds that commuters going to or coming from Staten Island usually takes the ferry or ride a car or bus because the island isn't connected to the city's subway system.

The Verrazano-Narrows Bridge also doesn't have a pedestrian or bicycle path for commuters, who prefer riding a bike or walking, to use.

A total of 38 racks were purchased and installed on a dedicated fleet of buses that serves the two routes, according to the press release.

Three types of front-mounted racks, each of which can fit up to two non-collapsible conventional bicycles, will be used during the pilot run.

The New York City Transit will be studying the impact of the bike racks on the safety, service, fleet maintenance, training, operations, costs and legal issues during the pilot run, according to the press release.

The result will determine whether the pilot will be continued or expanded to other routes.

The Wall Street Journal adds that Caroline Samponaro, deputy director of Transportation Alternatives, a pedestrian and cycling advocacy group, have praised the announcement of the bike racks being added.

She said it is a great step for the city and hopes that it would lead to other routes getting bike racks as well.