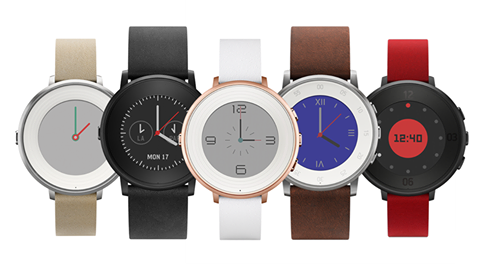 There's a new Pebble smartwatch in town. Retailing for $249, the Time Round is the company's first circular smartwatch and is set for a November release date.

"At 7.5mm thin and weighing just 28 grams, Pebble Time Round is the thinnest and lightest smartwatch in the world," the company said.

Buyers can choose from two band sizes in leather and metal - 20mm and 14 mm - and three finishes - black, silver and the 14mm band exclusive rose gold.

Essentially, the Time Round is a circular version of Pebble's acclaimed Time smartwatch. It has the same color epaper always-on display.

"It connects to both the iPhone and Android devices, displaying notifications, controlling music and other smartphone features remotely and running Pebble apps, of which there are more than 6,500 available," The Guardian said.

But come its November release date, the Pebble Time Round smartwatch will be greeted by Android Wear and watchOS rivals - a stark contrast to when the original Pebble launched uncontested in 2013.

As Wareable noted, many of Pebble's unique selling points are now gone. For instance, the Timeline feature has been copied in Apple's watchOS 2. Unlike its stablemates, the Time Round's battery life is only good for two days although it's still more than its rivals.

It's not cheaper than its rivals anymore. Google previously announced Android Wear for iOS which means Pebble's compatibility "is now less of a consideration too."

It's a good thing then that the Time Round smartwatch is a looker with a "female-friendly design."

"The fifth Pebble watch has graduated from geek chic into something altogether more grown up," Wareable said.

"It's the first smartwatch that looks like a classic wristwatch and furthers our mission to create useful technology that blends into your everyday life, not the other way around," Pebble CEO and co-founder Eric Migicovsky said, as quoted by The Guardian.

The Pebble Time Round smartwatch starts at $249 and can be reserved at Pebble.com. North American release date is set for early November. Retail reportedly begins in the UK later this year followed by the EU early next year.