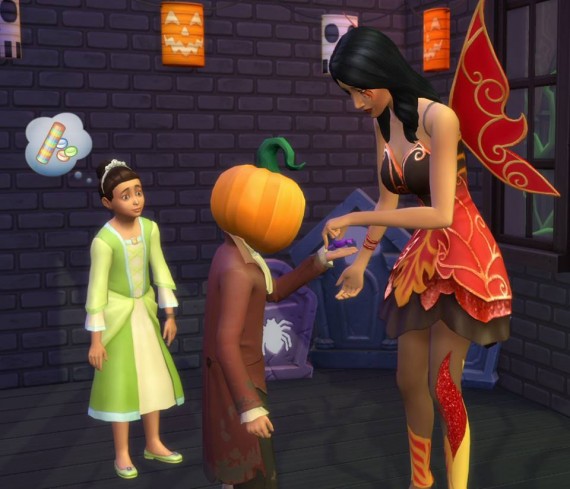 Halloween is coming up and to set the mood for your Sims, EA announced "The Sims 4 Spooky Stuff" pack.

The stuff pack brings two new gameplay objects: the Spooky Candy Bowl, which has a mechanical hand that tries to grab Sims as they reach in for candy, as Tech Times pointed out, and the Pumpkin Carving Station.

With the latter, "your Sims can make festive works of art, creating the jack-o-lantern of their dreams," EA said.

Ghost Sims can even take the illuminated jack-o-lantern and wear it on their heads and join the Halloween celebration or scare Sims even more.

The "Spooky Stuff" pack also lets your Sims throw a new kind of Halloween-themed party called a Spooky Party. "Sims 4" players will be able to decorate and virtually turn their Sims' homes into a haunted house with creepy objects such as tombstones, possessed paintings, a haunted cauldron spider webs, and tattered furniture, among others.

The creepy vibe can even stay on beyond Halloween.

"All these decorations will provide the perfect ambience as your Sim cooks up three new nasty recipes: an Eyeball Cheese Plate, Zombie Cake and Spooky Cookies," Tech Times said.

Much like Halloween in real life, players can ask for part treats from other Sims though it's also possible to get a trick instead.

"The Sims 4 Spooky Stuff" pack brings new costumes perfect for the Spooky Party you'll host or attend. Whether it's ninjas, pirates or Super Llamas, there's an outfit waiting for Sims.

"Of course, these costumes aren't restricted to use at Spooky Parties, either - if you want to dress your Sim like a witch year-round, you can totally do that," according to EA.

"The Sims 4 Spooky Stuff" pack is set for a worldwide release date on Sept. 29. Players will need the full game and all updates installed to get the new stuff pack.

Check out the trailer below: