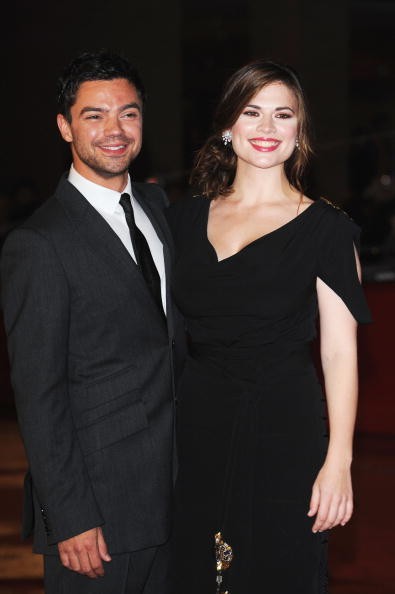 The past week saw some light "Agent Carter" season 2 spoilers that previewed Peggy's next outing.

Ever wondered what stars of the Marvel period piece do in between takes? Star Hayley Atwell showed exactly that as she shared short videos of her pranks with co-star Dominic Cooper.

In the first video, Atwell was talking to the camera seated in a rocking chair being pushed by Cooper - until he pushed too much and fell off it.

Not to be outdone, the British actress soon got her revenge by the poolside.

Apart from showing friends having a good time, the videos also contained some light "Agent Carter" season 2 spoilers. As The Movie Network noted, Atwell was in her Peggy outfit in both. Extras can also be seen wearing period-correct garb.

In case there was any doubt why season 2 would have a poolside set, TMN pointed out that like future son Tony (Robert Downey Jr.), Howard Stark (Cooper) is also known for throwing lavish parties.

In previous Franchise Herald reports, much of "Agent Carter's" original cast was confirmed for season 2. Although Cooper was said to make a comeback, many were in doubt of his involvement due to his busy schedule.

For TMN, Atwell's videos "show that the actor is back for another go around as Howard Stark."

With season 2 moving to Los Angeles, Marvel saw fit to provide fans what to expect for Peggy's next outing. The comic book giant released a teaser photo featuring Peggy with the city's skyline behind her.

"The vibe of the whole thing is very Old Hollywood, and it gives me a really good feeling about the next round of episodes," Bustle's Alexis Rhiannon said.

And those attending next month's New York Comic Con are in for a treat. Per the website, the teaser will be available as a mini-poster starting Oct. 8 at the Marvel booth.