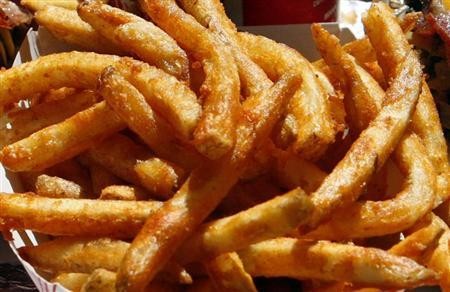 More than half of low-wage workers employed by the largest U.S. fast-food restaurants earn so little that they must rely on public assistance to get by, according to a study released on Tuesday.

This ends up costing U.S. taxpayers billions of dollars a year, the study said.

Data from the U.S. Census Bureau and public benefit programs show 52 percent of fast-food cooks, cashiers and other "front-line" staff had relied on at least one form of public assistance, such as Medicaid, food stamps and the Earned Income Tax Credit program, between 2007 and 2011, researchers at the University of California-Berkeley and the University of Illinois said.

In a concurrent report, the pro-labor National Employment Law Project found that the 10 largest fast-food companies in the United States cost taxpayers more than $3.8 billion each year in public assistance because the workers do not make enough to pay for basic necessities themselves.

"It doesn't matter whether you work or shop at McDonald's or not, the low-wage business model is expensive for everybody," said NELP policy analyst Jack Temple, who worked on the report. "Companies ... are basically pushing off part of their costs on the taxpayers."

The studies follow large nationwide demonstrations in August, when fast-food workers went on strike and protested outside McDonald's, Burger King and other restaurants in 60 U.S. cities, demanding a "living wage" of $15 per hour.

The U.S. fast-food industry generates sales of $200 billion a year. The companies have long said that mostly young people do the entry-level work of flipping burgers or making milkshakes and that these positions are stepping stones to higher-paying jobs. However, the NELP found that the median age of a fast-food worker was 28, Temple said.

McDonald's Corp and Burger King Worldwide Inc did not respond to requests for comment. Wendy's Co declined to comment, and Yum Brands Inc did not immediately provide a comment.

The Employment Policies Institute, which has opposed calls for higher fast-food wages in the past, said in a statement that the reports "ignore economic evidence that dramatic wage hikes would make fast food workers worse off" when employers "replace employees with less-costly automated alternatives."

U.C. Berkeley labor economist Sylvia Alegretto, who worked on the report from her school and the University of Illinois, said the economic recovery did not make life much easier for these workers, who are stuck in a low-wage rut.

"They took it on the chin when the economy was bad, and now that it's better, wages aren't going up," Alegretto said. "In fact, they're making less than their counterparts were 50 years ago."

Alegretto said her team was "very conservative" in estimating the number of low-wage workers, counting only those who worked more than 10 hours a week for at least 27 weeks a year.

The median wage for front-line fast-food workers is $8.94 per hour, according to the NELP's analysis of government data. Many of these jobs are not full-time.

Twice as many fast-food workers enroll in public aid programs than the overall workforce because of the low wages, limited work hours, and skimpy benefits their jobs afford them, according to the Berkeley study.

But even those who work full-time are struggling. More than half of these families are enrolled in public assistance programs, the researchers said. This costs taxpayers nearly $7 billion per year, more than half of which is in health insurance costs.

Overall, families with a working member account for 73 percent of all enrollments, amounting to two-thirds of all public benefits spending, the study said.

In other types of service work, such as maintenance, laundry and personal services, the researchers found that one-third of employees are enrolled in public assistance programs, as were about 30 percent of workers in the retail and hospitality sectors.

The time frame of the Berkeley study includes the 2007-2009 recession and the subsequent years of slow economic growth. During that time, the number of workers eligible for public assistance increased in some states.