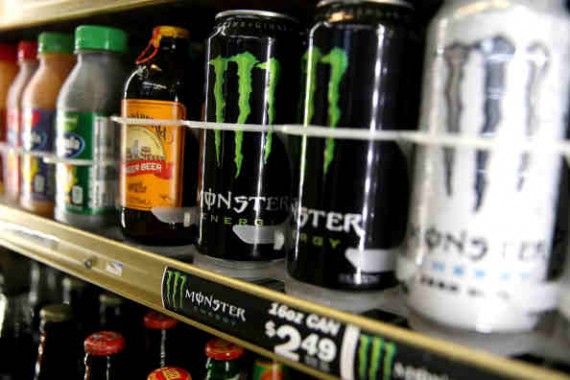 McDonald's Corp. is testing the sales of Monster Beverage Corp's energy drinks in about 20 U.S. branches, according to a report from The Wall Street Journal.

The fast food restaurant chain is looking for a boost to reverse its sales slump.

The Wall Street Journal adds that McDonald's said they always listen to feedback from customers on what they want.

"We're always gathering feedback from customers on the food and beverages they'd like to be served at McDonald's and this is another example,'' the company said.

The Wall Street Journal adds that adding energy drinks on its menu could provide a boost to McDonald's slumping sales.

The fast food chain has been trying to reverse a three-year sales slump as consumers are growing tired of the company's offerings.

The Chicago Tribune adds that McDonald's has reported falling sales for seven straight quarters and its third quarter earnings will be reported on Thursday.

Some analysts though feel that McDonald's is about to make a turnaround after making bold moves to improve its business.

The Chicago Tribune adds that McDonald's recently launched the nationwide roll-out of its all-day breakfast menu.

The testing of energy drinks in its menu comes after Coca-Cola Co, acquired a 16.7 percent stake at Monster Beverage in June, according to The Wall Street Journal.

The investment is part of a diversification plan by Coca-Cola after industrywide soda volumes in the U.S. fell for 10 straight years.

The Wall Street Journal adds that McDonald's has a long-standing beverage supply contract with Coca-Cola.

A spokeswoman from McDonald's told The Wall Street Journal that they are testing the sale of 16-ounce cans of Monster for $2.29 or two cans for $4.

They are conducting the test in Florida, Georgia, Illinois, Michigan and Ohio.