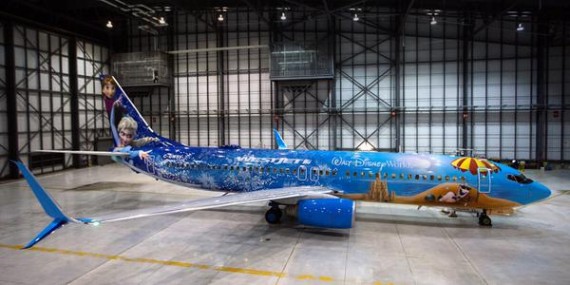 There's just no letting go of "Frozen" it seems. Canadian airline WestJet unveiled one of its Boeing 737-800 passenger jets is now adorned with paintwork and interior design inspired by the hit Disney movie.

"The plane features characters Anna and Elsa casting snowy magic from the aircraft's tail towards the nose, where Olaf the sun-loving snowman is depicted relaxing on a warm, Florida beach," the Calgary Sun said.

According to the Calgary-based airline's blog, the plane's elaborate paintwork used up 643.5 liters of 23 colors. It said that it took a team of artists and designers from the US, Canada and Germany 21 days in 12-hour shifts working 24/7 to finish the whole thing.

Reportedly, glitter was even added in some sections "to add shimmer and shine as the aircraft moves."

Check out the time lapse video on how the 737 was painted here.

But WestJet didn't stop the "Frozen" treatment on the outside of their Boeing 737-800. The exterior's cold-warm theme extends to the interior with matching headrest covers and decals.

"In the rear of the aircraft, the overhead bins and headrest covers have a cold theme," WestJet said.

"As you move toward the middle of the plane, the interior decoration transitions to become warmer, ultimately arriving on a warm, sunny theme at the front of the plane."

Warm or cold? Your choice. Our newest custom-painted plane has a winter end and a summer end. pic.twitter.com/49SjS6pwu6

According to the Calgary Sun, the "Frozen"-themed 737-800 already took off on its maiden voyage last week taking on WestJet's Toronto to Orlando route. It won't be confined to flights to Orlando though.

The airline said the aircraft, registered as C-GWSV with tail number 810, will fly throughout their 737 network.

The "Frozen"-themed Boeing 737-800 follows WestJet's first Disney-themed aircraft featuring Sorcerer Mickey from the 1940 classic "Fantasia" which was unveiled in 2013, according to the Calgary Sun.