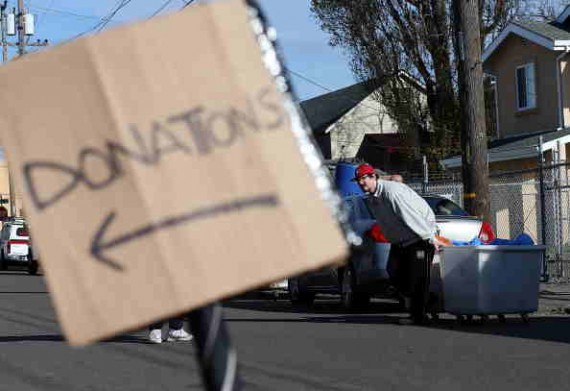 The office of New York Attorney General Eric Shneiderman announced in a press release that it has reached $700,000 settlement agreement with Thrift Land USA of Yonkers, Inc.

Thrift Land, a for-profit company, was caught making a lot of money from selling clothes that were supposedly donated for charity.

The company allegedly uses charity as a façade to trick and mislead the public into thinking the clothes they donate will benefit the charities whose logo appears on its donation bins, according to the press release.

Instead, Thrift Land made huge profits selling the donated clothes while the charities that appear on its bins received only a small monthly fee for the use of their name and logo.

The charities that appear on the bins are Big Brothers Big Sisters of Rockland County and I Love Our Youth, Inc., according to the press release.

Attorney General Schneiderman said in the press release that what Thrift Land did is "both deceptive and illegal."

"When a for-profit company masquerades as a charity, my office will hold it and its owners accountable," he said.

Reuters adds that selling the donated clothes has generated Thrift Land with revenues of at least $5.6 million in 2013 and $4.4 million in 2012.

The company sells these donated clothes to other companies who then resell it to buyers in Mexico, Jordan, and other countries.

Reuters adds that the two charities that appear on Thrift Land's bins are paid $1,000 monthly for the use of their names and logo.

As part of the settlement, Thrift Land has paid $50,000 in penalties and costs, according to the press release.

The company then made $650,000 payment to two non-profit organizations in the New York Community Trust and the Westchester Community Foundation.

The Attorney General's office said in the press release that the payment to the two organizations was to fulfill the charitable intent of the people who donated clothes.

The office has also reached a settlement with Big Brothers Big Sisters of Rockland County and I Love Our Youth, Inc. for entering into an agreement with Thrift Land for the use of their names and logos.

I Love Our Youth has agreed to pay $50,000 in penalties and costs and to dissolve the organization, as part of the settlement, according to the press release.

For Big Brothers Big Sisters, their settlement requires them to directly oversee, manage and supervise any and all charitable solicitations and/or advertisements in the name of the charity moving forward.