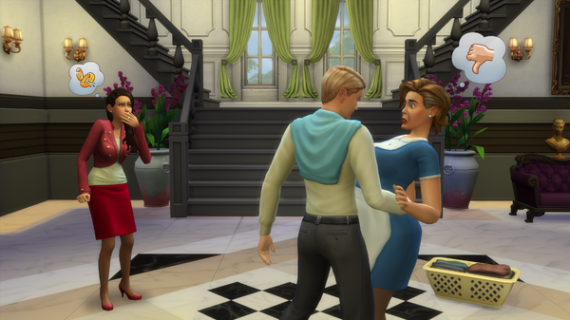 "The Sims 4" developers explain the jealousy trait and share how they've made Sim's reactions more realistic.

As players may know, the jealousy trait was added last month. According to the patch notes, Sims with the said trait get jealous more easily than those who don't have it.

"They gain a boost in Confidence boost from being around their significant other, but get Tense if they haven't seen them recently."

The whole thing works but the way Sims reacted to things needed to be updated, according to a developer post on the game's official website.

Before, reactions were limited to a Sim actually witnessing the event.

"Even if the partner was in the room while the cheating was happening, they could be unaware if their back was to the actual event," The Inquisitr pointed out.

With "The Sims 4" update though, Sims can now see and hear things better around them. Cheating Sims will have to be sneakier with their indiscretions.

The developer said they tweaked reactions so that Sims act accordingly, depending on the situation. For example, mild flirting may warrant a disappointed reaction, but a spouse could start a fight if a Sim is caught kissing someone else.

It's in these improvements that the jealousy trait came about, the developer explained.

In other "The Sims 4" news, the game and some of its stuff packs are currently available at discounted price as part of Origin's Zomboss Invasion Sale.

"The Sims 4" standalone game is 50 percent off right now at $34.95. The Origin-exclusive Digital Deluxe edition, which adds new in-game content, is also at 50 percent off at $44.95. Alternatively, the upgrade can be purchased separately for $9.95.

Per Origin, the sale, which also includes other titles, ends Nov. 3. Now might be a good time to pick up "The Sims 4" or any of its stuff packs before fiddling with the jealousy trait.