Jennifer Lawrence And Co-Stars Get Their Hands Dirty Before Release Of ‘The Hunger Games: Mockingjay, Part 2’ 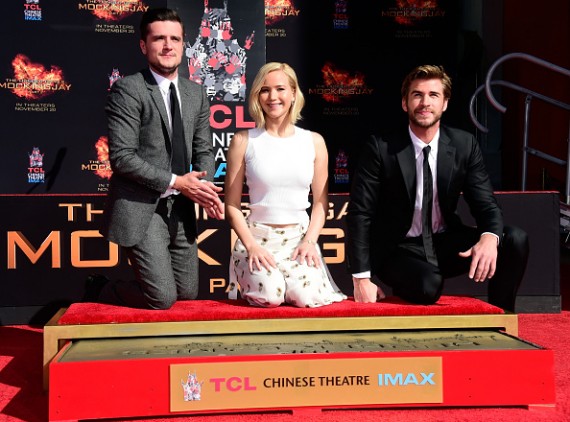 The final film for “The Hunger Games” franchise is set to be released on November 20.

Amidst the release of “The Hunger Games: Mockingjay, Part 2,” Jennifer Lawrence and her co-stars participated in a handprint ceremony at the TLC Chinese Theatre on Saturday, according to Variety.

“I did not know that we were going to have to make a speech today,” Lawrence stated.

“I’m very grateful. I think I can say that on behalf of everyone here for the ‘Hunger Games.’ I can’t remember your names. I’m just kidding, I know your names.”

Lawrence, Josh Hutcherson and Liam Hemsworth signed their names, placed their hands and feet in the cement and gave a few autographs for fans before leaving, according to E! News. The three actors reportedly traveled to a press conference for the upcoming film after the ceremony.

During the press conference at the Four Seasons Hotel, Lawrence was given the chance to look back on her days of playing the epic Katniss Everdeen.

“I feel that I had two endings with Katniss. One when we wrapped the film in Berlin and that was kind of saying goodbye to the movie and then I had a moment with my nephews about a year later," explained the Oscar-winning actress.

“They played my children in the scene that we shot so it was an amazing closure to this character that I've loved for so many years to have my family there, my blood family, I got to say goodbye to both."

Despite the end of the franchise, the actress knows that Katniss Everdeen is beyond just a character for many people.

“I feel the impact of being part of such a huge movie that has meant so much for so many people," she explained.

“This character is overwhelmingly supportive of women, obviously, and this iconic, I don't feel a personal impact, I think if you ever become aware of that it takes away from that a little bit, it's the movie, and the characters…it's kind of like your avatar self."