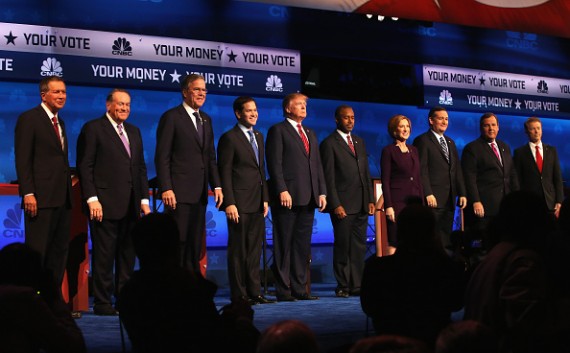 The next GOP debate lineup set for Nov. 10 and hosted by the Fox Business Network (FBN) will reportedly feature two candidates less.

According to ABC News, Chris Christie and Mike Huckabee didn't make the cut for next week's debate. The two will join Bobby Jindal and Rick Santorum in the undercard.

"Participation in the Nov. 10 debate was based on 4 recent polls: the candidates needed to average 2.5 percent higher to be featured in the main debate, and 1 percent or higher to be in the undercard debate," the website said.

Christie and Huckabee almost but not quite made it to the main GOP debate both reportedly averaging 2.25 percent in the polls.

The network recently announced it will open access to the GOP debate with a free live steam on their website. Fox Business also said it has partnered with cable and satellite TV providers such as DirectTV, Mediacom, Suddenlink, Frontier and Cable One to let subscribers have access to FBN for the debate.

According to Politico, the move should see FBN's ratings go up. The website noted that CNBC's GOP debate last month attracted 14 million viewers although it did coincide with the World Series.

FBN should also be able to close the gap between its reach, said to be at 74 million homes, to that of rival CNBC's, at 93 million homes, according to the website.

Next week's GOP debate will have the lineup "focus on jobs, taxes and the general health of the economy, as well as domestic and international policy issues," FBN said in a statement. The live stream will begin Tuesday, Nov. 10 at 6 p.m. ET and 9 p.m. ET.