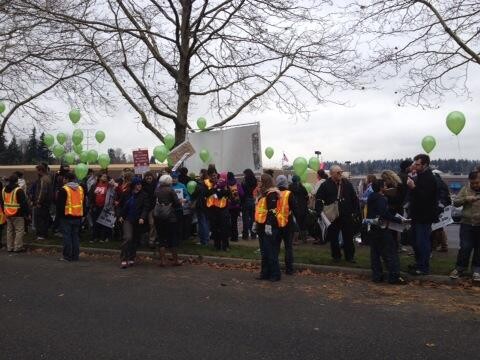 The union group, Warehouse Workers United held the events in Ontario, Calif., along with other communities including the southern part of Los Angeles, Chicago, San Francisco, Seattle, and Sacramento.

"Walmart has the responsibility to this community to do better," Lupe Palma, director for Wal-Mart's warehouse workers told The Sun. The workers transport company merchandise daily, however several earn nothing greater than $25,000.

The protesters paraded outside of the store on Mountain Avenue, shouting words and phrases in English and Spanish, and holding boards that read "Livable Wages Over Greed."

Participants were then arrested, cited, and let go.

"Black Friday is a big stage, and we're one of the biggest players in the retail industry. We're not surprised that those trying to change our industry are using this platform to get their message out, and we respect their right to be heard," David Tovar, Wal-Mart vice president of corporate communications said in a pr newswire press release about the company's success on Black Friday. "We expect some demonstrations at our stores today, although far fewer than what our critics are claiming and with hardly any actual Walmart associates participating. For our part, we want to be absolutely clear about our jobs, the pay and benefits we offer our associates, and the role retail jobs play in the U.S. economy. Walmart provides wages on the higher end of the retail average with full-time and part-time associates making, on average, close to $12.00 an hour. The majority of our workforce is full-time, and our average full-time hourly pay is $12.81 an hour. We are also proud of the benefits we offer our associates, including affordable health care, performance-based bonuses, education benefits, and access to a 401K."

"We're only asking for something basic - food on our tables and roofs over our heads," Rodriguez told The Sun.