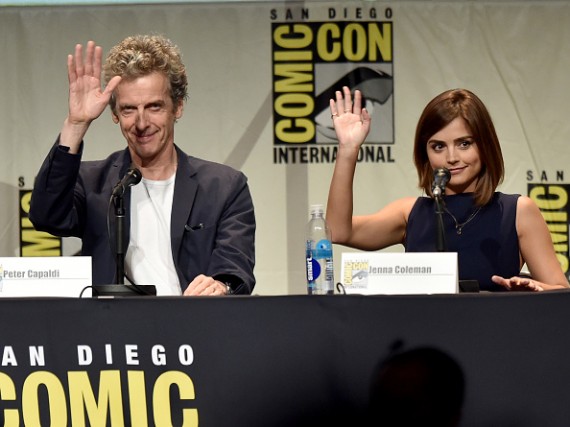 It will be "sad over a number of weeks" when Clara leaves after "Doctor Who" season 9, so says Peter Capaldi. And when she does, show runner Steven Moffat hinted it may be for good.

By now, every Whovian knows Clara (Jenna Coleman) is leaving the TARDIS for good. While it's always sad to see a companion go, Capaldi said her exit will be a particularly sad one.

Speaking to BBC Radio 1's Nick Grimshaw, the Doctor himself said "The Imposible Girl's" exit will be "sad over a number of weeks," according to Radio Times.

"I don't want to go into what happens, because it's very clever what happens in it, but it's very sad," the Scot actor said. "It's really sad."

Capaldi didn't reveal much details on the circumstances of Clara's exit from "Doctor Who" season 9.

"It's not quite what you [think is] going to happen," he teased.

The 57-year-old advised Whovians the world over to be ready with heartbreak.

"Get lots of hankies ready, that's what I would say," he concluded.

It's still a mystery how Clara Oswald will leave "Doctor Who" but whatever is planned for her, it looks like she won't be returning in a future episode.

"Literally, I have nothing in mind for Clara, she's vanished from the fictional universe forever," show runner Steven Moffat said as the Lucca Comics & Games panel, as quoted by Doctor Who TV.

"But I think what she's going to do by the end of this series will shock, horrify and surprise you, in roughly that order," he added.

Moffat's comments have many fans wondering if Clara will die in the "Doctor Who" season 9 finale. He did tell Variety that Capaldi "is going nowhere" and will be returning as the Doctor for season 10.