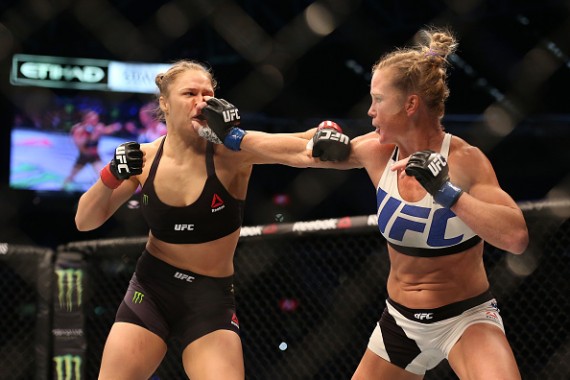 Ronda Rousey lost her fight to Holly Holm Sunday night at UFC 193, according to ESPN.

Despite the shocking loss for the nearly undefeated women’s bantamweight champion, Rousey is still going strong with movie deals, endorsements and her ongoing drive.

Rousey will reportedly be filming the “Road House” remake in February. The script for a movie based on her autobiography is also reportedly still in the works.

Any fight that Rousey is in is worth watching, especially because we don’t know what to expect. If the fight is a rematch against Holm, it’ll bring in an even larger audience. Unfortunately, the highly anticipated rematch may not be ready until UFC 200 on July 9, 2016, according to the LA Times.

“I just wanted to thank everyone for the love and support," Rousey wrote on Instagram.

“I appreciate the concerns about my health, but I’m fine. As I had mentioned before, I’m going to take a little bit of time, but I’ll be back."

As she takes her well-deserved break, we can’t forget the fact that Rousey paved the way for women in this sport. There was reportedly no women’s division in the UFC until Rousey stepped in.

This is a fact that even her recent competition acknowledged.

“I told her I appreciated her and we wouldn’t have the opportunities we had unless she had been such a great champion, and that I respect her a lot,” Holm said regarding her brief conversation with Rousey after the fight.

Following the match, Rousey was reportedly transported by ambulance to a hospital and admitted overnight.

“Ronda is a fighter. Ronda is born to fight. Again, it is too much sometimes with everything else that happens but -- three fights -- she is a fighter," stated longtime trainer, Edmond Tarverdyan.

“They want her to fight that fight ... that's why the UFC is as exciting as it gets, because they're fighters and nobody is just fighting on the time they want to -- they have to be ready and that's about it."