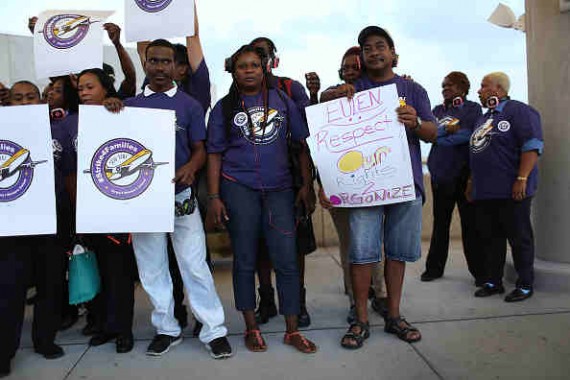 Airport workers at seven of the busiest hubs in the U.S. went on a strike on Wednesday, November 18, 2015, and will continue until Thursday, November 19, 2015, according to a report from Reuters.

The workers are fighting against what they say are bad wages and threats against unionizing.

The Service Employees International Union (SEIU) said that about 2,000 cleaners, baggage handlers, and other workers will strike at New York's Kennedy and LaGuardia airports, according to Reuters.

They will also be conducting a strike at Newark Liberty, Chicago O'Hare, Boston, Philadelphia, and Fort Lauderdale.

Damaso Mejia, a worker involved with the SEIU, told Reuters that they are conducting a strike because they "don't receive enough money to pay the rent."

Mejia cleans and checks the plane interiors for suspicious objects at New York Kennedy airport for $10.10 an hour.

Reuters adds that Mejia will start working at a second job next month and will log 18-hour days to supplement his current income.

Jean Timmer, a 41-year-old cabin cleaner for Ultimate Aircraft, told CNN Money that the money he makes is not enough.

CNN Money adds that Timmer, who has a daughter, stressed the importance of earning a living and securing medical benefits.

"Safety concerns are a really big deal and if we get injured who's going to pay for that -- we are," he said.

CNN Money adds that airport workers are demanding for a new contract with the strike.

They want a contract that includes medical benefits and higher wages of $15 an hour.

Reuters said that the strike comes just before air travel picks up for the Thanksgiving holiday in the U.S.

American Airlines, Delta Air Lines, United Continental, and JetBlue said that they do not expect the strike to impact their operations.

CNN Money adds that a spokesperson for JetBlue said that they are working with their partners "to ensure there are no flight interruptions."

Reuters adds that the strikers work for companies that U.S. carriers contract for some airport operations.