Recipient Of The Most Extensive Face Transplant Returns Home To Family 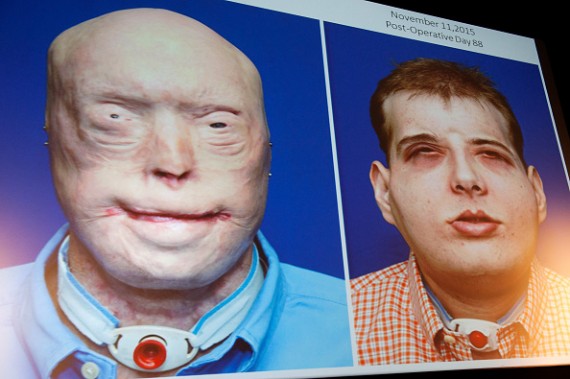 Volunteer firefighter Patrick Hardison was injured in 2001 while trying to rescue a woman believed to be trapped inside a burning house, according to The Washington Post.

The 41-year-old, who received the most extensive face transplant ever performed by surgeons at the NYU Langone Medical Center, returned home to Senatobia, Mississippi on Sunday night, according to ABC News.

Hardison was reportedly greeted by hundreds of people cheering him on and holding signs that read “Welcome Home.” This is the first time Hardison returned home since having surgery three months ago.

“Here's a guy with a huge personality who just wants to get to the solution,” stated renowned reconstructive surgeon Dr. Eduardo Rodriguez, who led the team to perform Hardison’s surgery in August.

“He's very gung-ho individual, you can see it. It's his nature and he was ready to sign whatever it took to move this thing along. For patients like that, which we do value, it's important for us to kind of slow the process down and ensure that they completely understand what they're getting into.”

The face transplant surgery reportedly took 26 hours. When Hardison looked into the mirror nine days after the procedure, he saw that he had lips, ears, a nose and eyelids for the first time in 14 years.

Getting to where he is now took a lot of work and patience on Hardison’s part.

Over the course of a decade, Hardison reportedly underwent more than 70 surgeries to try to rebuild his mouth, nose and other parts of his face.

After being evaluated by Rodriguez and his team, it reportedly took a little over a year to find a donor that had a skeletal structure close to Hardison’s. The surgeons eventually found donor David Rodebaugh, a successful BMX rider who was reportedly declared brain dead after hitting his head in a bicycle accident.

“That donor and his family gave me this gift, and I can never thank them enough for giving me something as great as this, something I thought I would never have,” said Harrison, who is still recovering from the surgery.