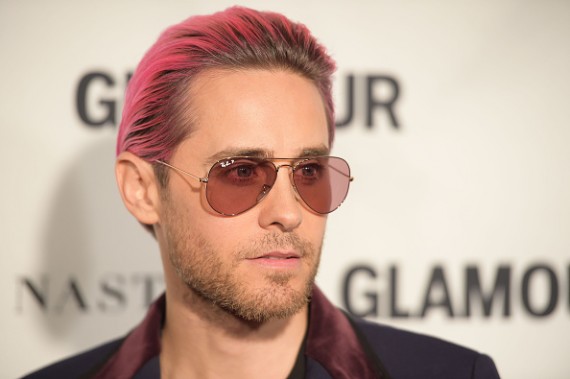 Everyone is excited and intrigued to see Jared Leto play "The Joker" in the upcoming villain-turned-superheroes movie, "Suicide Squad." But has he taken his method acting way too seriously that he's having a hard time getting out of character?

It may or may have been his method acting but it appears that Jared Leto\'s months of playing "The Joker" is delighting both fans and fellow Hollywood celebrities.

During the LACMA's 2015 Art+Film Gala on Saturday, the "Suicide Squad" actor pulled out all the stops and did what any "Joker" actor would do - wreak havoc on the red carpet (or in this case, photobomb Joshua Jackson's wife, Diane Kruger).

Diane Kruger, amused by her Jared Leto's antics, posted a photo of the moment on Instagram, writing: "Just you wait, I'll get you back ... @jaredleto,"

Previously, MTV reported that Jared Leto was very committed in his role as "The Joker" in the "Suicide Squad," although he was unsure whether or not he was method acting (perhaps because it was very convincing).

"Sort of," Jai Courtney, who plays Captain Boomerang said when asked if Jared Leto was method acting. "I don't know how you measure that these days. I haven't seen him, since we started working, out-of-character, let's put it that way,"

"I don't think any of us are naïve to the pressure he's under," Courtney added. "It's not something I've talked about with him, but I've seen him working and it's cool, man."

But even in between takes, Jared Leto never let "The Joker" in him rest - earlier, it has been reported that the movie villain gave his co-star, Margot Robbie a rat as a prank.

On the other hand, "Suicide Squad" director had reportedly hired a therapist on set to keep the actors in check with reality.

"David Ayer is about realism," Adam Beach, who plays Slipnot in the movie, said in a interview.

"So if your character is tormented, he wants you to torment yourself," Beach explained. "He wants the real thing ... We kind of have like a therapist on board if you fall off the wagon and really are villainous. There's a friend of (Ayer's) that's very unique in making sure we have our ground."

"Suicide Squad" will premiere in U.S. theaters on Aug. 5, 2016. It follows the story of imprisoned supervillains who have been hired by a top-secret government agency for special, black ops missions in exchange for clemency, according to IMDb.