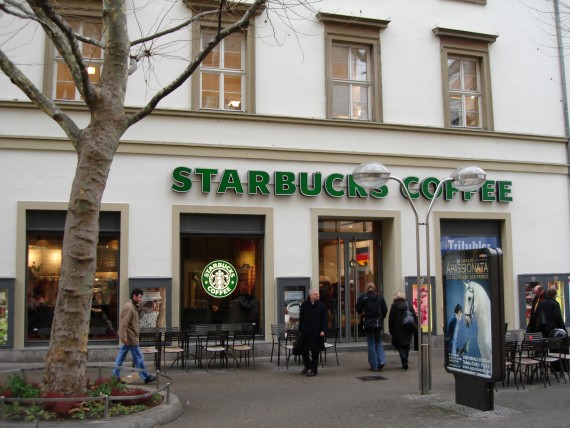 Some Starbucks is picking up on selling beer and wine to increase revenue.(Photo : Creative Commons)

The Franchise Herald takes a look at the Top 5 strange stories from companies in 2013.

:A Tennessee police officer was let go from the force after shooting a squirrel to death at a Dollar General store the Huffington Post reported in October.

Putnam was removed from the Mountain City Police Department after he fired his gun at a squirrel that did not have any weapons after attempting to control the animal that had ventured into the store, located in Johnson County WJHL reported. Mountain City police officers are required to let their supervisor know when they discharge a weapon; something Putnam did not do. They must also submit a written statement according to guidelines set out by the department

A couple was greeted with a free bag of money when getting breakfast at a McDonald's in Hermitage, Tenn. television station Newschannel 5 reported.Greg and Stacye Terry, who are regulars at the McDonald's location were accidentally given a sack containing thousands of dollars cash. The money was somehow put near the franchise burger chain's drive-thru window, and placed in the Terry's hands rather than their breakfast food. The two returned the money.

Customers were welcomed by an alligator at a West Florida Wal-Mart in Oct. 20 ABC News reported. The store remained open throughout the ordeal, and the surrounding vicinity was blocked off by the Apopka Police Department therefore reducing the size of the crowd which had formed to view the spectacle, and take pictures.

Store employees eventually secured and locked the location's front door so the gator would not come into the store, and instead follow the commands of responding officers who attempted to lead him away from the business.

However, the alligator went off to the back of the store until it was found by a "trapper" or animal control professional, who was brought in to subdue the animal. No injuries were reported.

Over 50 Starbucks customers paid for the products of the vehicles in front of them at one of the coffee chain's locations in Detroit mlive.com reported Nov. 27. Starbucks gives a tall coffee to an individual courtesy of the company, if another good samaritan buys it for them.

The city received 30 complaints from residents about stinging in their eyes and throats, and some headache. Therefore, Irwindale city officials requested a judge shut down the plant, which made uncooked material for its hot sauce product three months out of the year, is currently harvesting chile peppers. A ruling on the order is expected last month.

A city consultant suggested the municipality utilize a $600,000 cleaning system to get rid of the odor and prevent it from getting into the atmosphere. The company looked into the system, but was curious to know what other options were available.

The company put in carbon filters last year to try and solve the problem, and has since added more following complaints from residents.

Huy Fong Foods has operated the factory in Rosemead Calif. for 30 years without having any problems. The building also sits in a residential neighborhood next to several production plants that make beer, and dog food.