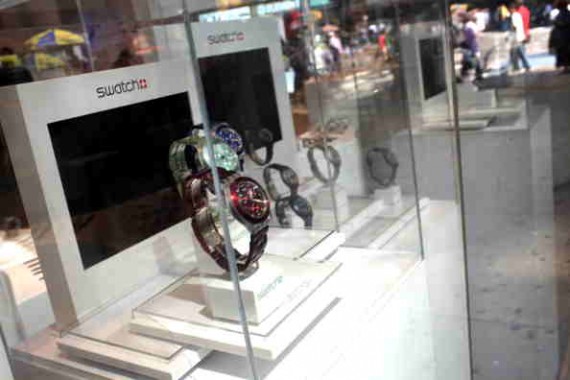 The Swatch Group Ltd. has announced in a press release that Swatch SA has signed an agreement with Visa, Inc. and Visa Europe about a partnership.

The partnership will allow Visa cardholders in the U.S., Switzerland and Brazil the ability to tap and pay with Swatch's new "pay-by-the-wrist" watch called Swatch Bellamy.

The new watch is designed to open an era of connected commerce, as mobile payment service continues to increase worldwide.

Swatch adds in the press release that they named the new watch Swatch Bellamy as a tribute to Edward Bellamy, an American writer who envisioned a world that has replaced cash with credit or debit cards in his 1888 novel.

The word "bel ami" also means good friend in French, which also indicates that the Swatch Bellamy will become a good friend to its wearer.

MarketWatch adds that the new watch is a significant step for Swatch as it tries to break into the growing market for smartwatches.

The new Swatch Bellamy will be the watchmaker's answer to the Internet-enabled devices that Apple Inc. and others offers.

MarketWatch adds that Smartwatch Group said the worldwide sales of smartwatches are expected to grow from seven million units in 2014 to 650 million by 2020.

The smartwatch space, though, is already dominated by Apple, Samsung Electronics Co. and others.

MarketWatch adds that Smartwatch Group said many of the expected sales of the smartwatches will come at the expense of traditional watches.

Sales are forecast to fall by around $2 billion the year and $7 billion in 2016.

Swatch said in the press release that Swatch Bellamy is slated to be available in early 2016 in the U.S., Switzerland and Brazil.

Swatch adds in the press release that it first presented Swatch Bellamy in China in October 2015.