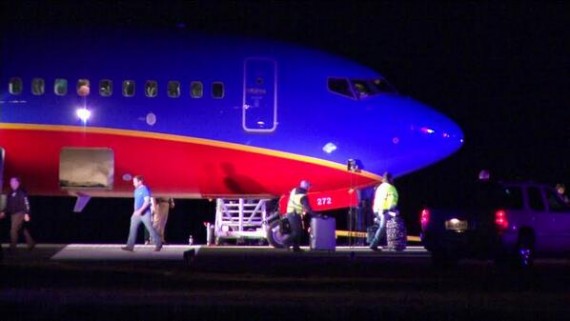 The Southwest Airlines pilots who mistakenly landed at the wrong airport Sunday found out they were in the wrong place when they landed.(Photo : Twitter Photo Section)

Southwest expected its 737-700 aircraft, which landed at an incorrect airport Sunday night to depart at 1 p.m. Monday the Associated Press reported.

"We expect the aircraft that landed at (PLK) Taney County airport in Branson, Missouri, to depart the airport today," Michelle Agnew a spokeswoman for Southwest Airlines told television station KSPR. "We continue to look into the circumstances which led the Pilot in command of flight 4013 from Chicago Midway to land at the airport, several miles from the Branson Airport we serve," Agnew told television station KSPR in an e-mail.

"We are cooperating with authorities in this investigation.  We want to thank first responders and Branson Airport Administrators for joining in the work with our ground operations staff to immediately take care of our Customers and their baggage last night," Agnew told KSPR. "We have since reached out to each Customer directly to apologize, refund their tickets, and provide future travel credit as a gesture of goodwill for the inconvenience," Agnew told KSPR.

The 124 passengers on Southwest Airlines flight 4013 had planned to travel from Midway International Airport in Chicago to Hollister, MO, but rather flew into Taney County Airport also known as M. Graham Clark Downtown Airport in Branson, MO The AP reported. The airport's runway measures 3,738 feet according to the airport's website. Branson's airport runway measures 7,140 feet its website reported.

"As soon as we touched down the pilot applied the brake very hard and very forcibly," Scott Schieffer, a 36-year-old attorney from Dallas told KSPR. "I thought, 'Well, this is a very short runway and this must be how he has to land," Schieffer told KSPR. "I was wearing a seatbelt but I was lurched forward because of the heavy pressure of the brake. You could smell burnt rubber, a very distinct smell of burnt rubber as we were stopping," Schieffer told KSPR."It was surreal when I realized we could have been in real danger and instead of an inconvenience, it could have been a real tragedy."