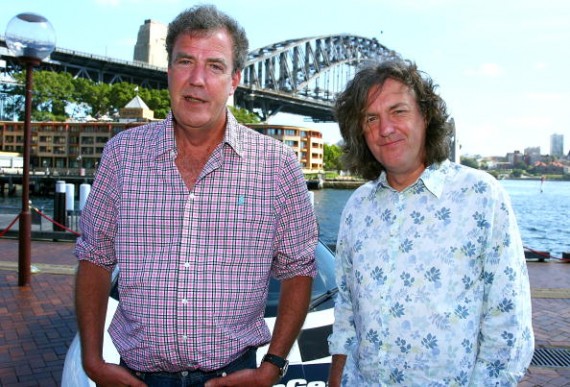 Jeremy Clarkson signed a lucrative deal for his Amazon Prime show but he isn't taking its budget for himself.

The former "Top Gear" frontman took to Twitter a few weeks ago to prove that he, along with James May and Richard Hammond, are spending the money wisely. In true Clarkson fashion though, it was tongue-in-cheek, according to Radio Times.

Proof we are spending the money on the screen; not on company cars. pic.twitter.com/Xknxjq7f52

The trio are seen posing with Reliant Robins. The 55-year-old later tweeted to explain that the three-wheelers are "company runabouts" and assured fans that the cars on their yet-to-be-named Amazon show "will mostly have more wheels."

As The Independent pointed out, Clarkson's tweet "is the only real update we've had on the new show since October." That was when Clarkson shared a photo of their team with much sleeker rides.

Jeremy Clarkson's Amazon show reportedly has a budget of £160 million over three years.

When the Amazon motoring show premieres, it will butt heads with the BBC's "Top Gear" - something James May welcomes with open arms.

"I think it's going to be very healthy having two internationally big car programmes," the 52-year-old said on "This Morning" (via Daily Express). "I [think] it's good we have a credible rival."

"Top Gear" is now fronted by "TFL Friday" host Chris Evans. He took over after Clarkson was fired over a "fracas" with a producer and Hammond and May's departure.

May reportedly confirmed an autumn 2016 release date for their Amazon show but said it remains untitled.

"We don't know what it's called. We've done a lot of brainstorming for things but it's hard to think of a name that isn't already done."

"We don't have a name, that's not being secretive we genuinely don't," May added.

Trademark filings uncovered in Sept. led many to believe the show could be called "Gear Knobs" but Clarkson already went on record to say it isn't.