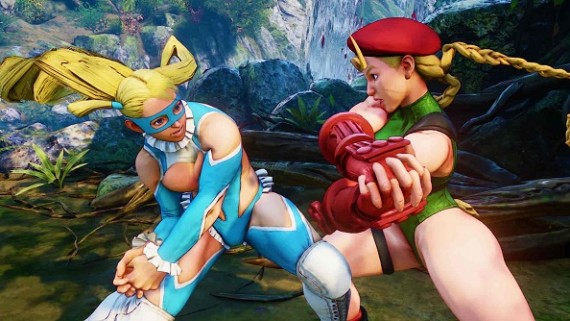 "Our objective with 'Street Fighter V' is to start over from zero," Ono told Portuguese website UOL Jogos, as translated by a NeoGAF member.

He added they wanted long-time and casual fans to return to "SFV," as well as "those who have never even touched a fighting game."

"So we can't have something in the game that makes people think, 'This is not acceptable,'" the fighting game series' producer said.

YouTube user ThisVideoAnnoyedMe uploaded before and after comparisons of R.Mika's gameplay. After the changes were made, her signature butt slap taunt can no longer be seen.

Similarly, Cammy's entrance has also been altered in such a way that her crotch is now out of frame during her entrance.

While many fans speculated "Street Fighter 5" had been censored, Ono emphasized there was no external influence involved in the gameplay changes.

"We decided to remove that because we want the biggest possible number of people to play, and we don't want to have something in the game that might make someone uncomfortable."

Capcom may not be able to remove everything that could offend people but Ono said their goal is to get as many as possible for people to think "Ok, there is this issue her, but it is within the limits."

VG247 reported fan reaction to the "Street Fighter 5" gameplay changes on Reddit, EvenHubs and other outlets have been mixed, "as to be expected."

According to Gamespot, a new beta test period for "SFV" will begin on Dec. 18 for the PS4 and PC.

Meanwhile, the "Street Fighter 5" release date is all set for Feb. 16, 2016. The game's final character, Fang, was revealed at PlayStation Experience 2015.