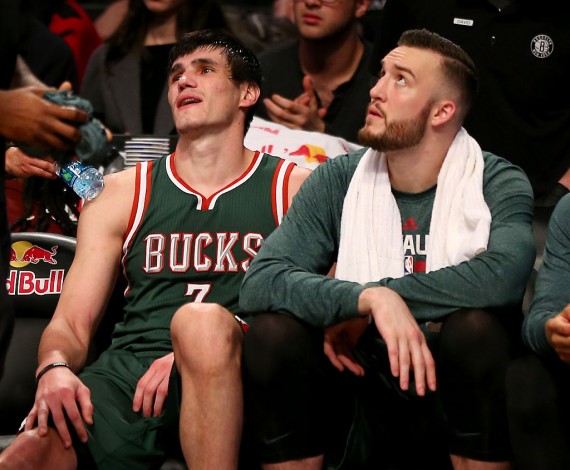 If there is one person who is not that happy with what is going on, it's Miles Plumlee. NBA trade rumors have it that the 27-year old forward is on his way out of the young team.

Plumlee arrived at Bradley Center from Phoenix Suns via a three-team trade on February this year. However, he is hardly seen on the court since the swap.

NBA trade rumors suggest the former Duke University stand out is on the market right now.

The transfer to Bucks is not going the way Plumlee wanted it. He started all but three games for Suns in 2013-14 NBA season but with the Bucks, he found himself in the bench most of the time. This season, he rarely gets burn time, no thanks to the arrival of big man Greg Monroe.

The trade is one step for Bucks to get rid of Miles Plumlee, NBA trade rumors hint. However, if that not happens, the team will opt to not extend his contract, leaving him no option but to audition to other teams.

"There is a good chance the Bucks will not make a qualifying offer in June to Plumlee should he stay for the duration of the season," Nick Borges of ESPN.com reported. "If that happens, Plumlee will enter July as an unrestricted free agent."

Right now, becoming a solid rotation player is impossible for Plumlee. Greg Monroe is having the best season of his career while John Henson proves a reliable back up. Jabari Parker is also playing splendid since returning from lengthy injury time, which means Plumlee as forward is the last option.

Plumlee showed promise while with the Suns where he averaged 8.1 points per game and 7.8 rebounds per game. With the bucks this 2015-16 season, he has only played 15 games and averages 1.7 points per game.