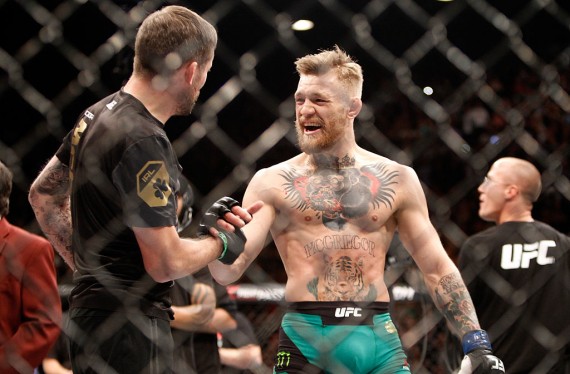 Conor McGregor - Jose Aldo fight in UFC 194 was finished in just 13 seconds. The Irish fighter won the highly-anticipated title fight through a solid punch in the first round.

The result was a shock to many but for Jose Aldo's cornerman, his shock turned to anger in an instant. He was so mad about what McGregor did to the Brazilian, he challenged Notorious to a fight right there and then in the octagon.

Footages of Hacran Dias shouting something to the current featherweight division cham surfaced online. He received flak for such act and he is a little ashamed about it.

"I told him to fight me," Dias said as per a report by The Sport Bible. "And that I would fight him for free. That was not a good moment and now a lot of people are saying dumb stuff. I don't know if he saw me or if he pretended he didn't."

Although he only served as cornerman in the Conor McGregor - Jose Aldo fight, Dias has an impressive MMA resume for himself. He is currently fighting in the featherweight division of UFC and is ranked #12 in such class.

Dias also said that talking about what happened to his fellow Brazilian Aldo is hard to discuss right now.

"He looked at me quickly and pointed my finger at his face, he could've played it off, but I told him to fight me," he said. "I guess we will see. This is a tough subject to discuss now, man I wish I was fighting him."

Right now, talks of a Conor McGregor - Jose Aldo fight rematch is there. Aldo, himself, demanded second edition of their match up after getting up.

"I think we need a rematch, and that will be my fight. The trash talking didn't affect me," he said as reported by the Daily Mail. "I don't care what he says. Thanks to everyone watching in Brazil and thank you for the support. I will be back."