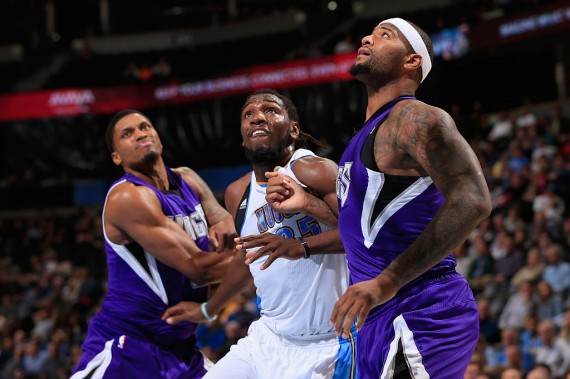 DeMarcus Cousins has been the face of Sacramento Kings for a very long while.

However, that might change this season as according to NBA trade rumors, Kings are 'listening' to offers from other teams.

"Sacramento is listening, but the Kings are in a holding pattern and currently have no plans to make a deal despite sitting in 13th place in the 15-team Western Conference, the sources said," Sheridan Hoops' Michael Scotto wrote.

Among other teams Scotto linked to Cousins and Kings is the Miami Heat who according to reports is set to loose big man Hassan Whiteside in free agency.

The thing though is that Miami is not in a good position to get the World Cup gold medalist and one-time NBA All-Star.

Adding that "he has a plethora of draft picks - including Brooklyn's unprotected 2016 and 2018 first-round picks - plus young assets (Kelly Olynyk, Jared Sullinger, Marcus Smart, etc.) and the expiring contract of David Lee to make a deal happen. This is a similar formula Ainge used in the past to acquire Kevin Garnett and Ray Allen."

This is not the first time DeMarcus Cousins get involved in NBA trade rumors. Before the 2015-16 season starts, there were reports that Los Angeles Lakers wants to swap their rookie D'Angelo Russell and sophomore Julius Randle for him.

This rumor was then fueled by alleged rift between the player and coach George Karl back in November.

Obviously, this did not push through.

Cousins remain as the team's focal point. The offensive minded big man is still the team's best player with 25.2 points and 10.7 rebounds per game. He also seem to be comfortable playing with new acquisition Rajon Rondo.

Sacramento Kings are currently at 12th place in Western Conference with 10-15 record. The team hasn't reached the playoffs since DeMarcus Cousins' era.

Will this NBA trade rumor push through?