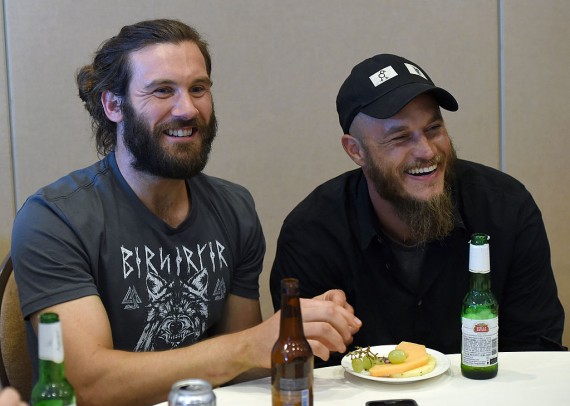 Waiting for "Vikings" season 4 release date? It is not yet here but fans at least have an idea about their schedule next year.

History Channel announce through a new clip that "Vikings" season 4 release date is on Feb. 18.

May Odin ride with you into Valhalla. An all-new season of #Vikings premieres February 18th at 10/9c.

The major highlight of the new teaser trailer is not something fans would be thankful for though. A furious Ragnar (Travis Fimmel) is heard shouting: "Rollo, you have betrayed your own kind."

It is not just Rollo (Clive Standen) who seem to have fallen out of favor to the king of Kattegat. At the start of the clip, with Katheryn Winnick's Lagertha as the focus, Ragnar is lamenting how she "betrayed my trust, and most importantly my love for you."

Series creator Michael Hirst also shared a photo of the characters' version of Last Supper which symbolizes the theme of the season.

"All the figures in these paintings are concentrated around the words: 'One of you will betray me,'" he wrote via Entertainment Weekly. "I think that's the key to understanding this image that we have from the show. It's exactly the same issue that's being confronted."

Standen earlier said the Rollo in "Vikings" season 4 will be completely different. He will also strike a deal with the French kingdom.

"We're going to see a completely different Rollo if he's ever going to conquer Paris and conquer the princess," he told Entertainment Weekly back in July this year. "He has to be far more cerebral, he has to be on his A-game all the time, and his attitude to Ragnar has to change. He can't always be in the doldrums of being this second-best brother that's in the shadows."

Alexander Ludwig confirmed in another "Vikings" season 4 spoiler that Rollo will be disowned by his family and his character Bjorn is out for his head for the betrayal.

"He's so hurt and he's going to kill him. In his eyes, there's certain things you can't forgive," he said in an interview with Zap2It.

"The fact is he turned his back on [Bjorn] and our entire community for himself and there's no coming back from that. Bjorn is so straight-edge in that when he makes a decision, he sticks to it."

Are you excited for "Vikings" season 4 release date? Will Rollo betray his brother Ragnar or he is just plotting something for the sake of the Norsemen?