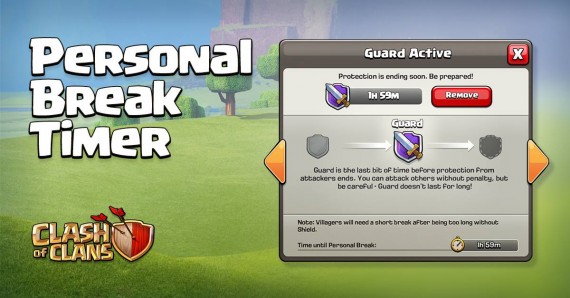 Supercell heard all your complaints about the "Clash of Clans" Town Hall 11 update and rolled out a new one to fix the personal break timer and other issues.

Earlier this week, the developer announced it would take "CoC" to maintenance "to fix some bugs and hopefully implement some tweaks."

Reportedly, the time limit has been increased from three to four hours. Limit extensions were also increased from 15 minutes to 30 minutes after defending without shield or getting kicked out without being attacked.

The Personal Break limit now fully resets when offline for 15 minutes (from 30 minutes) without Shield or Guard.

Other changes the update brought are increases to Free Guard when Shield expires for all leagues, updated matchmaking parameters from Town Hall 9 to 11 as well as changes to Skeleton hit points and Clan Spells donations.

Following the Town Hall 11 update, Supercell was flooded with complaints from players. Memes posted on the "Clash of Clans" sub-Reddit expressed player frustration with the update, according to iDigitalTimes.

It got so bad that Clashers gave the game negative reviews on the iTunes App Store and Google Play, Design & Trend reported.

Per the website, news outlets from Supercell's native Finland have even taken notice of growing player dissatisfaction.

With the latest update though, Touch Arcade's Tasos Lazarides thinks most player complaints have been addressed.

"I have a hunch most of you will be pretty happy with [the changes], and it's good to see that Supercell is monitoring the game closely and isn't afraid to change things around."

Check out YouTuber Clash of Clans Attacks' video on the latest update below: