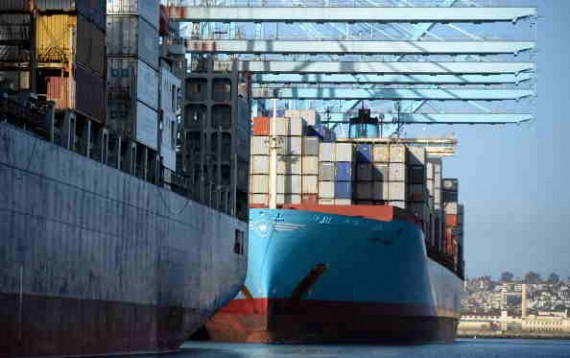 The CMA CGM Benjamin Franklin, the largest container ship, has arrived at the Port of Los Angeles on Saturday, December 26, 2015, according to a report from Top News.

The ship, which is the biggest ever ship to dock at a North American port, could have a significant impact to the local economy.

"Today there are seven gangs of longshore (workers) working this ship, which equals about 150 people," he said. "Container movement is the heart of our economy here in the harbor area."

Prior to Saturday, ships such as the CMA CGA Benjamin Franklin are deployed exclusively for Asia to Europe trade.

The Maritime Executive said that the CMA CGA Benjamin Franklin, a 398 meter, 18,000 TEU vessel, arrived at APM Terminal's Pier 400 after sailing from China.

Gene Seroka, the executive director of the Port of Los Angeles, said that the port has already seen container volumes above 700,000 TEU for the past six months.

He said that it "demonstrates the consistency and strength" of the port's "supply chain partners."

He also said that the arrival of large vessels, including the CMA CGA Benjamin Franklin, will allow the port to further show its gains made this year "in terms of effectively moving greater volumes" through the port.

The Port of Los Angeles handled a total of 709,968 TEU in November 2015, which is an increase of seven percent compared to the same period last year.

The CMA CGA Benjamin Franklin will operate a regular service that will connect some of China's main ports, which include Xiamen, Nansha, and Yantian, with Los Angeles and Oakland.

The mega-container will call at the port of Oakland on December 31, 2015.