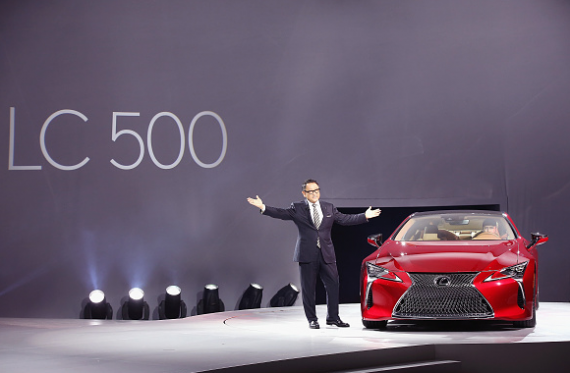 Lexus revealed LC 500 at Detriot Car Show this year and it looks like LC 500 price is ready to compete with the likes of Mercedes and BMW. Also, by going against the Hybrid car trend, Lexus is still keeping its luxurious reputation.

According to Fortune, "Amid a sea of electric, plug-in hybrid, hydrogen fuel-cell, and other vehicles at this year's North American International Auto Show-a.k.a. the Detroit auto show-Lexus went old-school. There, Toyota president and CEO Akio Toyoda pulled off the wraps of a dramatic two-door flagship vehicle, powered by a 467-horsepower V8 engine connected to a rear-wheel drive transmission."

The same article reports that "The LC 500 is intended to compete with the likes of the BMW M6, Maserati GranTurismo, and Mercedes S-Class Coupe. At just under $100,000, it will carry a base price below them all."

With such a competitive price range, it looks like LC 500 is turning heads.

The reviews for LC 500 has also been pretty positive. According to the Verge, "Lexus is producing kick-ass sports cars these days - though precious few are willing to admit it. It's time to give this brand some respect. And general consensus at the show has been positive."

Sounds like Lexus LC 500 will definitely draw some attention to people looking for a non-hybrid sports car.

CNN even dubbed LC 500 as one of the "cool cars" at the Detroit Auto Show, meaning that the Lexus marketing department is doing their best to promote this sports car against all the other Hybrid vehicles that debuted this year.

Do you think Lexus will get the edge over BMW and Mercedes this year? Let me know in the comments below!