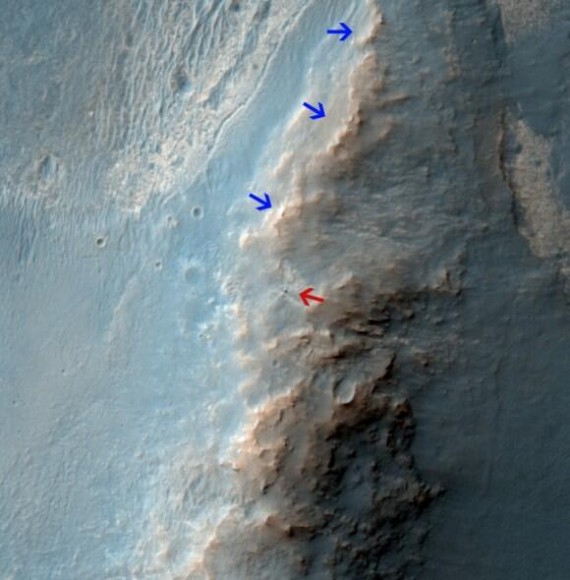 A photo recently released by NASA, shows a jelly doughnut found by the administration's Mars opportunity rover on the red planet was not the result of a meteors force space.com reported Thursday.

The rover found the rock a couple feet in front of it while going across the red planet Discovery News reported January 17. NASA has since determined it was only a stone that flew in front of the administration's camera.

"Once we moved Opportunity a short distance, after inspecting Pinnacle Island, we could see directly uphill an overturned rock that has the same unusual appearance," Ray Arvidson of Washington University in St. Louis, and Deputy Principal Investigator for the Opportunity Rover told Fox News at the time of the decision. "We drove over it. We can see the track. That's where Pinnacle Island came from," Arvidson told Fox News.

Although it was just a regular rock, astronauts determined the large amounts of manganese, and sulfur on the rock, also known as Pinnacle Island, were dissolved of water Fox News reported.

"This may have happened just beneath the surface relatively recently or it may have happened deeper below ground longer ago and then, by serendipity, erosion stripped away material above it and made it accessible to our wheels," Arvidson told Fox News.

The new findings included two kinds of argon gas in argon 36, and argon 38. Curiosity was able to find these through its Sample Analysis at Mars tool (SAM) a press release reported.

Rhawn Joseph, a neuroscientist-astrobiologist submitted documents for a lawsuit to United States District Court because he felt the agency was keeping information from the public about the rock.

Joseph wanted NASA to photograph different parts of the rock, and do a full examination, and then tell the public what they found The Sky Valley Chronicle reported.