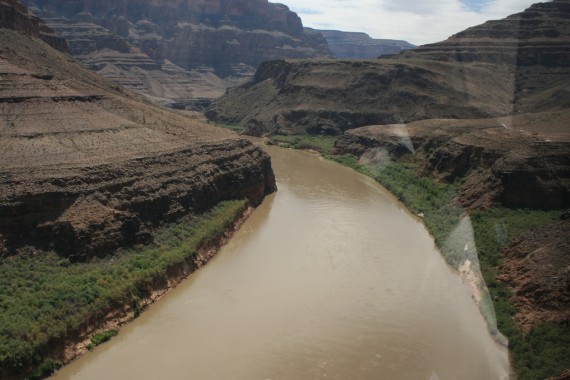 Google partnered with the advocacy group American Rivers on a trip through the Colorado River to capture images of the Grand Canyon National Park in Arizona. Google Maps released the “river view” project on Thursday, getting views of 286 miles of the river.(Photo : S^S)

Google partnered with the advocacy group American Rivers on a trip through the Colorado River to capture images of the Grand Canyon National Park in Arizona.

Google Maps released the "river view" project on Thursday, getting views of 286 miles of the river, according to USA Today. The trip marks the first time that Google Maps technology was used on a major whitewater river in the U.S.

Karin Tuxen-Bettman, lead of the project, said she wants the images to educate the public about the Colorado River, which American Rivers listed as one of the most endangered waterways in 2013 because of overuse and drought, SFGate reported.

"We hope this inspires viewers to take an active interest in preserving it," Tuxen-Bettman said.

36 million people from Denver to Los Angeles drink water from the Colorado River, USA Today reported. American Rivers said the river irrigates about 4 million acres of land, which grows 15 percent of crops in the U.S.

Environmentalists and Federal officials have been raising awareness about the decreasing supply of water in the river, which serves close to 40 million people in seven Western states. Google captured several images from Lee Ferry to Pearce Ferry that show signs of drought in a ring around Lake Mead, as well as images that show the results of damming the river, SFGate reported.

"It's just a valuable snapshot in time of what the river is like right now," Amy Kober of American Rivers said.

Google said the river views are the first images the company has published on Street View from the U.S., according to SFGate. Tuxen-Battman said the company used its Street View technology on a boat and went up the Rio Negro, a tributary in the Amazon, in 2011. Google has taken images of the Grand Canyon before, using cameras mounted on backpacks for views of hiking trails in 2012. The views were released in early 2013.

Rich Harter said he will use Google's Street View of the Colorado River to show visitors what they can expect from rafting trips, SFGate reported.

"The scale is so immense and the geology is so varied, and the time frame over which the canyon formed is just so long," Harter said. "How do you describe these things to people that haven't seen them? You can't."