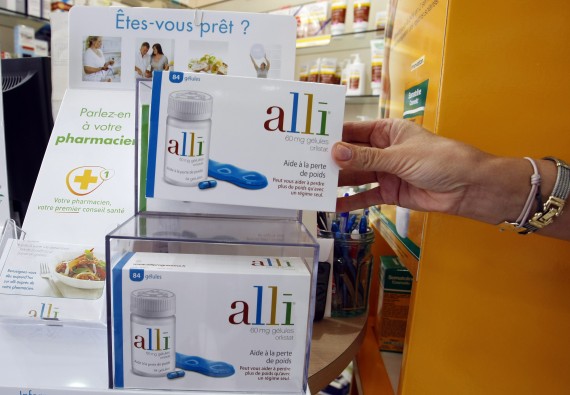 Other pills were found in GSK weight loss containers.(Photo : Reuters)

GlaxoSmithKline Consumer Healthcare recalled its alli weight loss products Friday from stores in the United States and Puerto Rico because the inventory may have been tinkered with a press release on the company's website reported Friday.

shapes and colors were reportedly discoverd in the containers, while some products also did not have proper labeling, and fake seals.

GSK has initiated an investigation based off information from the United States Food and Drug Administration.

"Safety is our first priority, and we are asking retailers and pharmacies to remove all alli from their shelves immediately," Colin Mackenzie, president, Consumer Healthcare North America said in a statement. "We have posted a Consumer Alert on our website, www.myalli.com, and issued a news release with information and photographs to help consumers determine if their alli is authentic."

"We are committed to finding out what happened and to doing everything possible to prevent future issues with alli," Mackenzie said in the statement. "We regret any inconvenience caused by this retailer recall."

The affected products include those with Carton Lot numbers 14372, and 14395 with a Feb. 28 expirations date the press release reported.

The product in question is colored in turquoise blue and has 60 Orlistat written on it.  A message saying Sealed For Your Protection is also listed on the upper inside of the product's container.

GSK advises those with affected products who are either uncertain or worried regarding its use to stop using it, and immediately contact them at 800-671-2554 to speak to an associate about the next steps.

The company also urges those who have swallowed the medication to contact their healthcare plan supplier the press release reported.