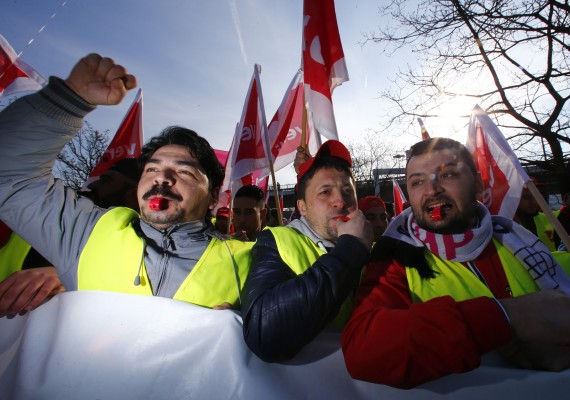 You may want to change your travel arrangements after Lufthansa Airlines canceled 3,800 because of upcoming protests from company pilots towards the end of the week.

The temporary adjustments to the schedule go into effect Wednesday, Thursday, and Friday BBC News reported Monday. The airline's cargo line will also be affected, however, the 500 other flights not slashed will fly as planned The Wall Street Journal reported. Pilots are not happy about the adjustments made to their retirement benefits.

"During the three-day walkout by Cockpit teams, there will only be around 500 short- and long-haul flights by Lufthansa and Germanwings," the airline said in a statement BBC News reported.

According to The Journal, the three day saga is expected to be the most time the airline has most endured during a strike, since the last incident in 2010 where pilots walked the picket line for four days.

Negotiations about pay have been ongoing for over two years, and modifications to pilots pensions and their transitional retirement benefits agreements have reported added to the stir The Journal reported.

In the last month however, security employees went on a strike of their own that reportedly disrupted traffic flow at Frankfurt International Airport leading to expenditures totaling three million euros or $4.1 million in United States currency The Journal reported.

The walk-offs also had a less of an impact on regional airports last month, but events at seven airports throughout Germany led to 600 flights staying grounded.

Talks between Vereingung Cockpit the union representing the pilots, and Lufthansa officials attempted to come to a consensus but were unsuccessful The Journal reported.

Vereingung and Lufthansa are reportedly still up for further discussing the matter in order to end the strike.

Eighty-five to 90 percent of Lufthansa's 5,400 pilots are under Vereingung. This includes the airline's cargo and germanwings entities.