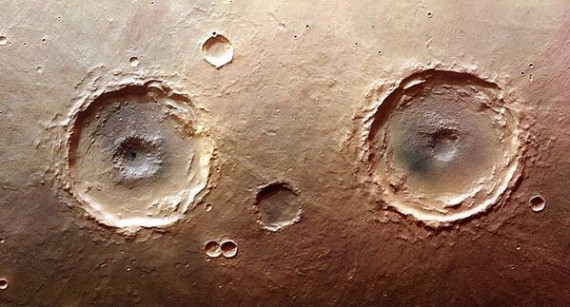 The brightest version of Mars in six and a half years is visible Tuesday night beginning at sundown The Los Angeles Times reported.

The occurrence signals the first time the red planet has appeared the nearest to planet Earth since Dec. 2007 which therefore means it will glow brightly in the night sky The Times reported.

The closest point humans will come to the red planet is predicted for April 14 because of the way it rotates The Times reported.

According to The Times, viewers can see the red planet ascended into the night sky when the sun sets itself in the west part of the sky, before it descends under the sun's horizon or area between the star and planet earth.

If someone cannot find the star in the sky they can use the big dipper's handle as a guide The Times reported.

Participants can also track the big dipper's square handle that leads to Spica, a star, which has the red planet right underneath it The Times reported.

Those interested can catch the action in person by lifting their head up to the sky or view it online via a livestream on the Slooh Community Observatory's website The Times reported.

One thousand fifty eight candidates out of 200,000 people who applied for selection on an inaugural mission to Mars received word in December that they had been chose The International Business Times.

Mars One, a non-profit organization  is working on establishing the new set of people on the red planet in 2023.