Mars Crater May Have Held Ancient Lake: Water on the Red Planet 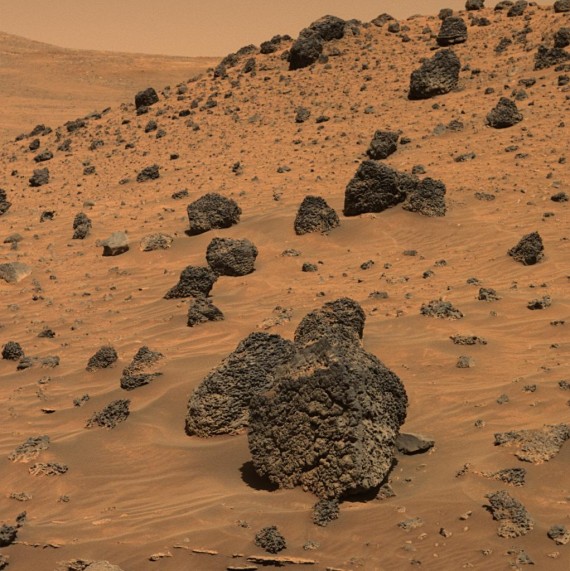 A new analysis claims that a crater on Mars may have once held a large lake of water. The body of water is referred to as “Lake Gusev”, and has appeared and disappeared numerous times in the past.(Photo : NASA)

A new analysis claims that a crater on Mars may have once held a large lake of water.

The body of water is referred to as "Lake Gusev," and has appeared and disappeared numerous times in the past, according to Astronomy Magazine.

The research was done by a team of scientists led by Steve Ruff from Arizona State University in Tempe.

Researchers said the floodwaters entered the valley, and have been around long enough to alter the tephra and produce briny solutions, Z News reported. The brines left behind residues of carbonate minerals when they evaporated.

NASA landed Spirit, one of its two Mars Exploration Rovers, inside the Gusev Crater in 2004. Gusev appeared as if it had once contained a lake. The rover focused on finding water-deposited rocks.

Spirit drove up to Columbus Hills, which was less than 2 miles away and stood 300 feet high. The rover did find ancient rocks that were altered by water. However, no lake sediments were found, and the scientists instead found evidence of hydrothermal activity, which were basically hot springs similar to those in Yellowstone National Park, Astronomy Magazine reported.

Columbus Hill's rock outcrop called Comanche provides hope for Lake Gusev, since the outcrop is very rich in magnesium-iron carbonate minerals. Ruff played a huge role in making the discovery in 2010. Comanche's carbonate minerals were originally associated with hydrothermal activity, but the researchers suggest a different origin with their new results.

"We looked more closely at the composition and geologic setting of Comanche and nearby outcrops," Ruff said. "There's good evidence that low-temperature surface waters introduced the carbonates into Comanche rather than hot water rising from deep down."

The outcrop began as a volcanic ash deposit called tephra that originally covered the Columbus Hills and nearby plains. Ruff said the material came from huge eruptions inside or around Gusev, Z News reported.

Afterwards, floodwaters entered the crater through the valley that breached the crater's southern rim, leading to the alteration of the tephra and creation of briny solutions. The research was published in the journal Geology.

Ruff said that NASA is planning to send a rover to Mars in 2020 to collect and cache samples, Astronomy Magazine reported.

"Scientifically and operationally, it makes sense to go to a place which we know has geologically diverse- and astrobiologically interesting- materials to sample. And we know exactly where to find them."