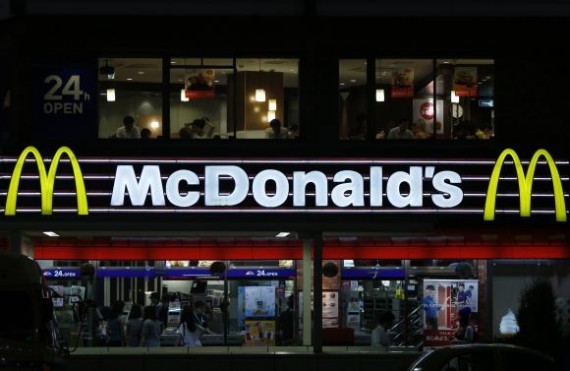 Customers are seen through the windows of a McDonald's store (top) in Tokyo, while others stand in line in front of cash registers, July 22, 2014.

McDonald's may be banned from serving burgers in Russia as the Russian sanitary watchdog Rospotrebnadzor has grievances about product quality and safety of the McDonald's fast-food restaurant, according to reports.

"We have identified violations which put the product quality and safety of the entire McDonald's chain in doubt," Rospotrebnadzor chief and Russia's chief sanitary officer Anna Popova told Interfax on Friday.

A regional branch of the consumer protection agency Rospotrebnadzor asked the court to declare production and sales of some products illegal due to "inappropriate physical-chemical parameters," she told Reuters.

The watchdog agency Rospotrebnadzor has previously been accused of acting in the political interests of the Kremlin, banning Georgian wine as Tbilisi strengthened ties with Washington and spirits from Moldova after the former Soviet republic boosted its drive to partner with the European Union.

In total, the agency found the McDonald's restaurants they reviewed had committed 11 violations of Russian administrative law, carrying a fine of 70,000 rubles, or about $2,000.

In a statement posted on the company's Russian Web site, McDonald's said it had not been approached by Rospotrebnadzor, and that it had "not received notice of any claim" against the company.

The McDonald's statement also disputed the allegations, citing "quality and safety of the products that we provide to our customers" as a top company priority, and stating that the nutritional values of food items were calculated "based on the methodology approved by the Food Institute of the Russian Federation."