Fast-food workers set to strike and march for $15 wage 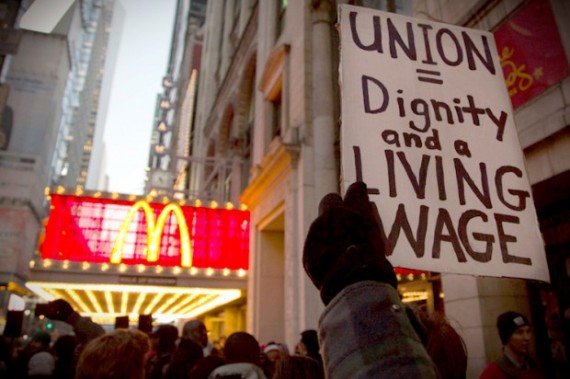 Fast food workers from across the country have voted in suburban Chicago to escalate their campaign for higher wages and union representation by including civil disobedience.

Kendall Fells, a Service Employees International Union representative, said the workers will be asked to do "whatever it takes" on Friday and Saturday to raise minimum wages to $15-an-hour and organize a union, Fox News reported.

"We need a nationwide sit," Mary Coleman, Milwaukee-based Popeyes Louisiana Kitchen employee and grandmother of six, told the other workers. "Across the nation, all fast food workers, retail workers, we pick a time, we pick a day, and everybody just stops."

"We want to talk about building leadership, power and doing whatever it takes depending on what city they're in and what the moment calls for," said Fells, an organizing director of the national movement.

The service workers union has supported the fast-food protests and strikes since the movement began in New York City in late 2012 by providing funding and organizing events. Fells said future plans would be "more high profile" as demonstrations are expected to involve more instances of civil disobedience.

However, fast food workers and advocates for the minimum wage hike argued that $10.10 isn't enough to provide for most of the workers in the industry who have families and children to provide for.

Delisline, who earns $7.35 an hour, said she and her four daughters live with her mother in Charleston, South Carolina, but still have trouble affording to pay the utilities, mortgage and resources for the children.

"To have a livable wage, it's going to need to be $15 an hour," Delisline said. "We make the owners enough money that they have houses and cars, and their kids are taken care of. Why don't (they) make sure I can be able to do the same for my kids and my family?"