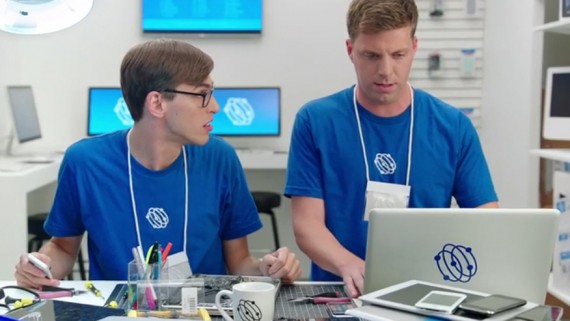 The South-Korean based technology giant is one of the many who critcised Apple for the failed livestream of the most anticipated tech event of the year. On Tuesday, the company unveiled its two new products in front of thousands of journalists, employees, technology experts and celebrities. The event could be seen in a livetream only available in the Safari browser running on iOS or Mac devices.

To the dismay of Apple fans, the livestream was unwatcheable for about 30 minutes. Samsung jumped the bandwagon of critics and released an ad entitled 'It Doesn't Take a Genius - The Live Stream #NoteTheDifference.' They released a total of six videos mocking not just the technical difficulties of the livestream event but also Apple's new products iPhone 6, iPhone 6 Plus, and the Apple Watch.

In the video, two males are dressed like the geniuses, what Apple stores call its tech experts. From the failed livestream to Apple being late to the phablet game to the short battery life, Samsung didn't miss a beat. As part of the marketing campaign, the company even quoted in a tweet the former CEO Steve Jobs saying that no one would want to buy a big phone.

"Guess who surprised themselves and changed their minds," the Samsung tweet said.

Apple CEO Tim Cook admitted that supersizing the latest iPhone is inspired by the success of Samsung's Galaxy line. "It's an incredible opportunity for us to switch people from Android to iOS. So yes, this is epic. It is epic," said Cook.

Samsung found a success in large-screen phones in their Galaxy line and has unveiled its own smartwatch September last year. This year, it launched Galaxy Note 4, Note Edge smartphones, and a Gear S smartwatch. The mockery video is part of the company's marketing campaign for the Galaxy Note 4.

Watch the hilarious video below: