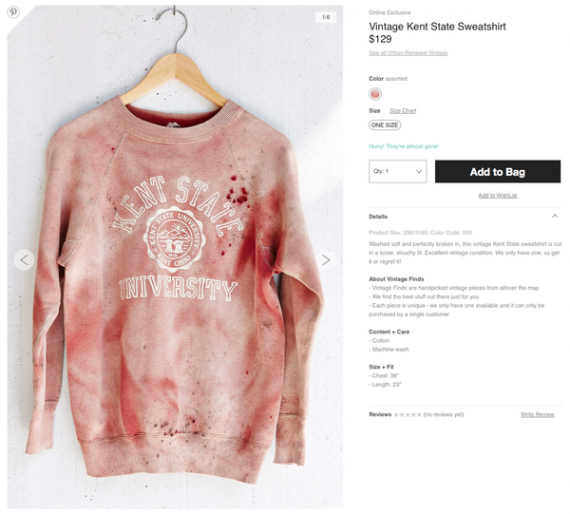 The theme of the sweatshirt seems to allude to the 1970 shooting in Kent State, in which four students were killed and many others were injured, according to some commentators. Representatives of the university said that the outfit is of "poor taste."

On May 4, 1970, Ohio National Guardsmen opened fire to a group of students protesting the Cambodian Campaign. Two of the students killed in the event were part of the protest while the other two were passersby on their way to class.

Twitter user @kickitupanacho said, "Hey @UrbanOutfitters, when will the Sandy Hook shirts be available? And will there be child sizes? #UrbanOutfitters." Attached is a photo of the bloodied sweatshirt.

The Kent State University released in a statement, "We take great offense to a company using our pain for their publicity and profit. This item is beyond poor taste and trivializes a loss of life that still hurts the Kent State community today." They invited those who purchased the sweatshirt to drop by their May 4 Visions Center where they'll gain a wider perspective on the events that transpired 44 years ago.

Urban Outfitters issued an apology on Twitter, saying that it's not real blood and the sweatshirt is part of their sun-faded collection. "It was never our intention to allude to the tragic events that took place at Kent State in 1970 and we are extremely saddened that this item was perceived as such," they said in the apology.

The sweatshirt sold out online after the popularity caused by the Twitter rage. Urban Outfitters has since removed the product from their online site to avoid further cause of online fury.

The hip retailer has caused multiple online stirs in the past, due to offensive clothing items such as the Navajo clothing and "Depression" shirts.